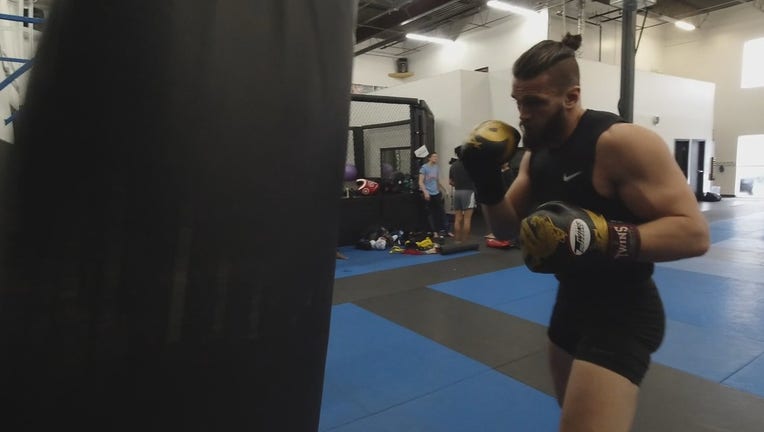 Bailey Schoenfelder, a former Gopher football player, made his debut as a pro MMA fighter. (FOX 9)

(FOX 9) - Bailey Schoenfelder spent several seasons as a special teams stud for the Gopher football team. These days, the former hard-hitting linebacker is packing a different kind of punch.

The former Gophers walk-on decided to go in a new direction seven months ago - one that led him to the professional world of Mixed Martial Arts.

A former Minnesota Gopher football player is embarking on a new pro career as an MMA fighter.

"You’re in a cage and they lock the door, and there’s a guy standing over there and you’ve got to fight him," Schoenfelder said, describing his new found sport. "It’s a weird thing. It’s almost like you can’t grasp it."

"Our whole section who bought tickets to see me exploded," Schoenfelder said of the crowd that came to watch his first fight. "I had to kind of breathe down the butterflies again after that."

When the bell sounded those nerves went silent. Schoenfelder won his first fight with a 20-second knockout at the Sanford Pentagon crowd.

"It was just instinct," Schoenfelder said. "It wasn’t like a mean punch, but it landed clean and I dropped him like a sack of potatoes."

"I was honestly surprised," Schoenfelder added.

Fighting for playing time on the field to fighting in an octagon is somewhat different, but there are parallels to playing football.

What’s helped Bailey in MMA is his wrestling experience from high school in South Dakota, where he won a state title his senior year.

"He’s a competitive athlete, who also has a wrestling background," Greg Nelson, owner of The Academy training facility said. "And he’s willing to put the time in."

One thing Schoenfelder has is time on his side as he begins this professional career.

"I’m 23, most people peak in this sport in their early 30s," Schoenfelder said. "I don’t need to rush into a bunch of fights and go get my butt kicked in UFC, and fall off."

He plans to continue to grow and attack new goals along the way.

"I want to train and keep developing," Schoenfelder said. "I want to take it as far as it’ll go."