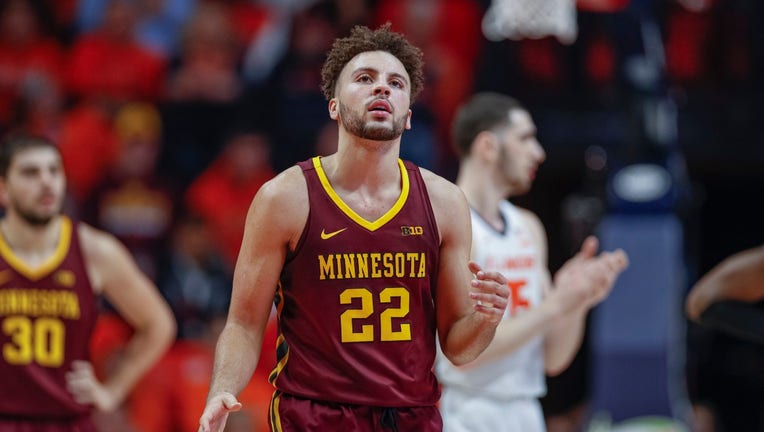 Gabe Kalscheur #22 of the Minnesota Golden Gophers is seen during the game against the Illinois Fighting Illini at State Farm Center on January 30, 2020 in Champaign, Illinois. ((Photo by Michael Hickey/Getty Images))

MINNEAPOLIS - Gabe Kalscheur’s life had already changed quite a bit since mid-March, when the Big Ten Tournament got canceled after two games, as did the rest of the college basketball season, due to the Coronavirus pandemic.

Things changed yet again, and for vastly different reasons, after the Memorial Day death of George Floyd in Minneapolis at the hands of the Minneapolis Police Department. A black man killed by a white police officer, who has since been fired and charged with murder. The three other officers to respond to the scene, now also fired and charged with aiding and abetting murder.

In the days to come, the streets of south Minneapolis looked more like a war zone than a community after protesters and rioters took over. Small businesses, many owned by minorities, burned to the ground or looted. Add the police department’s Third Precinct to that list. Kalscheur, who will be a junior with the Gophers’ men’s basketball team in the fall, is still coming to grips with it all. He spoke with Andy Katz, a college basketball expert with Big Ten Network and Fox Sports, Tuesday morning about the aftermath.

“It’s been crazy. It felt like a movie, everything that was going on. It was crazy that this was in our community, our backyard,” Kalscheur told Katz.

Floyd’s death sparked weeks of protesting, both peaceful and violent, in Minneapolis and across the globe. It’s not the first time a black man has died an in incident involving police. So why the outpouring of emotion now? Kalscheur had a powerful answer for Katz.

Several black athletes and coaches have gone public in the weeks following Floyd’s death with their own experiences of racial profiling with police.

Kalscheur says his experience is a little different, but didn’t hide his concern when he gets behind the wheel of a vehicle. He currently has two white parents, but told Katz he grew up having conversations with his birth father about interactions with police.

“He gave me the routine to be respectful to an officer. Hands on the dashboard and all that, so I know the drill,” Kalscheur said. “I know that I am colored and that they do see me as supposedly a threat sometimes. So I do know the drill. It’s scary, my heart does race if I get pulled over. I’ve been pulled over before for speeding, I was scared. It was frightening because you don’t know what can happen in that situation.”

Kalscheur says things will be undoubtedly different as students begin heading back to campus. There still remain health concerns amid the Coronavirus pandemic, but at some point, he and his Gophers teammates will be back in Dinkytown and getting ready for the 2020-21 season, assuming it goes on as planned.

Most importantly for Kalscheur, he doesn’t foresee any problems among his team whenever they do get together. They have players from different cultural backgrounds, different ethnicities and beliefs. The Gophers will feature at least 11 black players next season.

Kalscheur says it’s important for athletes like himself to speak out. They can be part of the healing process, initiating change and moving forward.

“It’s one of the biggest things that’s most talked about over the news and over social media right now, it’s still going on. So I feel like right is a time like everyone knows it’s OK to reach out and step out and make your voice heard,” Kalscheur told Katz.

Briefly, Kalscheur and Katz talked about the outlook for the Gophers in the 2020-21 season. Minnesota finished 15-16 last year, but the roster has changed significantly since March. Daniel Oturu is in the NBA Draft process, and Payton Willis and B.J. Greenlee have left the program.

If Robbins and Gach can get waivers for immediate eligibility, the Gophers should have high expectations for next season.

“I feel really good about this team,” Kalscheur said.