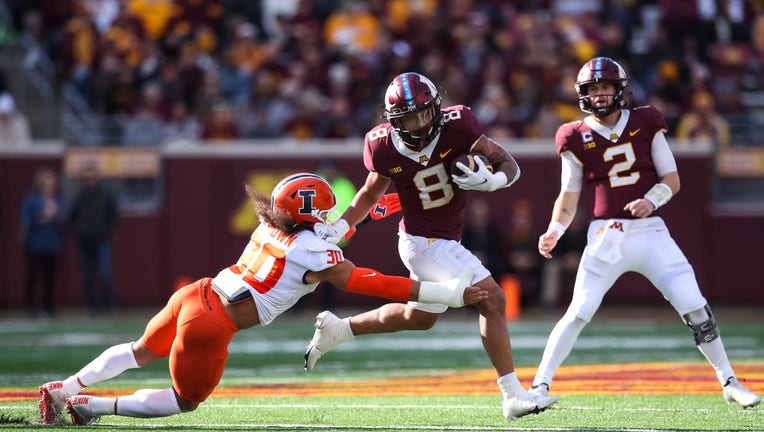 Ky Thomas #8 of the Minnesota Golden Gophers is tackled by Sydney Brown #30 of the Illinois Fighting Illini in the third quarter of the game at Huntington Bank Stadium on November 6, 2021 in Minneapolis, Minnesota. The Fighting Illini defeated the Go ((Photo by David Berding/Getty Images))

MINNEAPOLIS - The University of Minnesota football team did not handle its first real prosperity of the 2021 season well last Saturday in a 14-6 loss to Illinois at Huntington Bank Stadium.

The Gophers, who hadn’t been ranked all season, came in at No. 20 in the first College Football Playoff rankings. They had sole possession of first place in the Big Ten West, leading Iowa and Wisconsin by a game, and were on a four-game Big Ten win streak. PJ Fleck had agreed to and signed a new seven-year contract.

The product Saturday looked more like the team that lost to Bowling Green as 31-point favorites than the one that rattled off four straight wins after that. Minnesota ran for just 89 yards, the offense needed a touchdown with 4:49 to play to avoid being shutout for the first time since 2017 and Tanner Morgan was sacked a season-high six times.

"Nobody wants to play like that. We did so many things that were uncharacteristic of us," Fleck said.

Fleck said Monday the response from his team when they returned Sunday for meetings was business-like. After all, it’s Iowa week and the Gophers still control their fate for a Big Ten West title with three games to play. Those are at Iowa Saturday, at Indiana and the regular season finale against Wisconsin.

The problem for Fleck is he’s 0-4 against the Hawkeyes. Two years ago, the Gophers were 9-0 and a top-10 team before a 23-19 loss to Iowa at Kinnick Stadium. Last year? The Hawkeyes pounded the Gophers 35-7, and Kirk Ferentz burned three straight timeouts with 19 seconds to play and the game over.

Ferentz said after, "We figured we’d take Floyd (of Rosedale) with us and leave the timeouts here."

Despite a frustrating loss to Illinois Saturday, the Gophers can position themselves better for a Big Ten West title with a win. They haven’t won in Iowa City since 1999, and Fleck has not yet touched Floyd of Rosedale.

"Rivalries are what makes college football really special. All records get thrown out the window. It’s a one game championship season with a rivalry trophy on the line," Fleck said. "It’s really fun to coach in games like that. I know it would mean a lot to our players, just as much as it’s going to mean to Iowa."

The Gophers’ offense has been inconsistent this season, largely because skill position players are getting hurt. Chris Autman-Bell, who missed time earlier this season with an ankle injury, went down injured during the third quarter of Saturday’s loss and didn’t return. Autman-Bell made one catch for 24 yards on the day. He went down on a deep throw from Morgan down the sideline after taking a hard hit.

Fleck said Monday Autman-Bell "looks good" and should be available at Iowa, but he couldn’t guarantee it.

"I would expect, I can’t really even say that. I’m not the doctor, so I wouldn’t want to officially go out there and say that. I would expect that he would play, from what I’ve heard today," Fleck said.

Daniel Jackson and Dylan Wright have each missed games this season. The Gophers are also down to Mar’Keise Irving and Ky Thomas as their scholarship running backs after Mo Ibrahim, Trey Potts and Bryce Williams all suffered season-ending injuries.

"If this were an NFL roster, we’d be on the street," Fleck said.

The Gophers control their own destiny in the Big Ten West division with three games to play, but so do three other teams. Minnesota, Wisconsin, Iowa and Purdue are all 4-2 in Big Ten play, and the schedule will sort itself out over the next three weeks. The Gophers still have Iowa, Indiana and Wisconsin left.

The Badgers travel to Northwestern, host Nebraska and come to Minnesota. The Hawkeyes have the Gophers, Illinois and Nebraska left and Purdue has Ohio State, Northwestern and Indiana left.

The simplest path for the Gophers to get to Indianapolis? Win your last three games.

"We talked about being in November and being in a hunt for a championship, and here we are with 19 days left. That’s what we said, every year we want to be in that type of hunt," Fleck said. "With all the challenges we’ve had and all the playmakers out, we’re in that hunt. It says a lot about the fight in this football team."