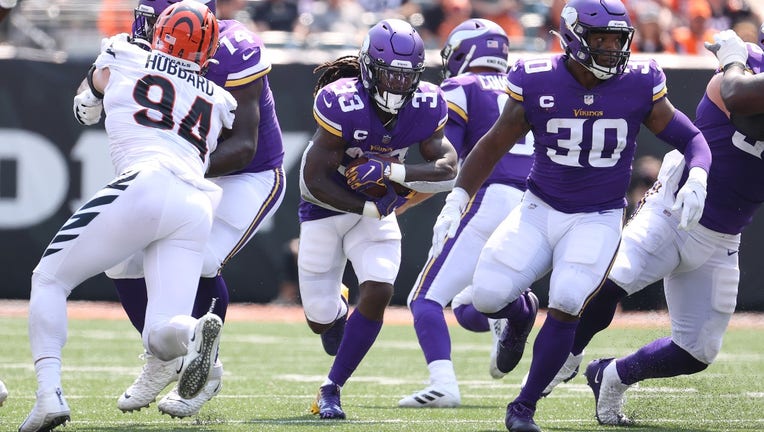 MINNEAPOLIS - The Minnesota Vikings and their fan base held their collective breath the two times Dalvin Cook went down injured in Sunday’s 34-33 loss at the Arizona Cardinals.

Cook first went down in the second quarter, laying on the field and grabbing his shoulder. He was able to get off the field under his own power, after suffering a stinger.

"I’ve been playing football since I was 4, that was my first stinger. It was just something different for me that I’ve never felt. It goes away when you play football," Cook said Wednesday.

Cook, who finished with 26 carries for 131 yards, also suffered an ankle injury during the second half after being tackled by JJ Watt. Cook was able to finish the game, but was clearly battling the injury.

Asked Wednesday if they plan to be cautious with Cook’s ankle as the Vikings prepare to face the Seattle Seahawks on Sunday, Mike Zimmer said, "At this stage, it’s time to get some wins. Dalvin is a tough guy, if he can’t play there’s a reason why he’s not playing. He makes us go, so we’re going to continue to play him."

Cook has 50 total touches through two games, with 42 carries for 192 yards and eight catches for 60 yards.

Cook, who was on the practice field Wednesday at TCO Performance Center in the early portion open to media but did not participate, didn’t seem overly worried about his ankle. He’s more worried about the Vikings climbing out of an 0-2 start.

They now host Seattle, Cleveland and Detroit the next three weeks.

MIKE ZIMMER IS 0-7 AGAINST SEAHAWKS

If the Vikings are to get their first win of the season on Sunday, it’ll be Mike Zimmer’s first time beating Pete Carroll and the Seahawks. Zimmer is 0-7 for his coaching career against Seattle.

Last year, the Vikings failed to get a fourth down conversion that could’ve extended a lead late in the fourth quarter. Then Russell Wilson converted a long fourth down over Cameron Dantzler, and the Seahawks went on for an improbable win.

In January 2016, Teddy Bridgewater was on pace to the lead the Vikings to a playoff win over the Seahawks before Blair Walsh missed a 27-yard field goal wide left.

"Each game is different. Miss a field goal in the playoff game, we’ve got them in 4th and 10 last year and 4th and 6, they convert twice. It’s just football," Zimmer said.

The Vikings got some good news on the injury front on Wednesday. Both Anthony Barr and Everson Griffen were on the field at TCO Performance Center and in pads, though they were both limited participants. Barr hasn’t had a full practice since Aug. 5, but was a limited participant on Sept. 8. He’s been dealing with a knee issue. Griffen was back on the field after missing last Sunday’s game with a concussion suffered in a car crash. Bashaud Breeland (back/shouder), Patrick Peterson (toe) and Eric Kendricks (hip) all were also limited participants on Wednesday.

VIKINGS HAVE 0-2 START TO CLIMB OUT OF

Mike Zimmer said after Sunday’s loss the Vikings are probably two plays away from being 2-0. Cook’s fumble at Cincinnati led to the Bengals’ game-winning field goal in overtime, and Greg Joseph’s missed kick at Arizona was the latest in the franchise’s series of issues with kickers.

The Vikings are 0-2, and the season is already at a turning point if they have intentions of making the playoffs. They can get things back on track with three straight home games against the Seahawks, Browns and Lions.

"We believe in our locker room and the group we have and in what we’re doing. But the results are all that matters and that’s what we’re measured by," quarterback Kirk Cousins said. "So we understand that in this league, winning and losing is really what it’s all about. We’ve got to be able to win."

The Vikings on Wednesday placed defensive back Harrison Hand on the reserve/COVID-19 list. The designation is for players who have either tested positive, or are considered high-risk close contacts to a carrier.

Hand did not play in last Sunday’s game at Arizona due to a hamstring injury.