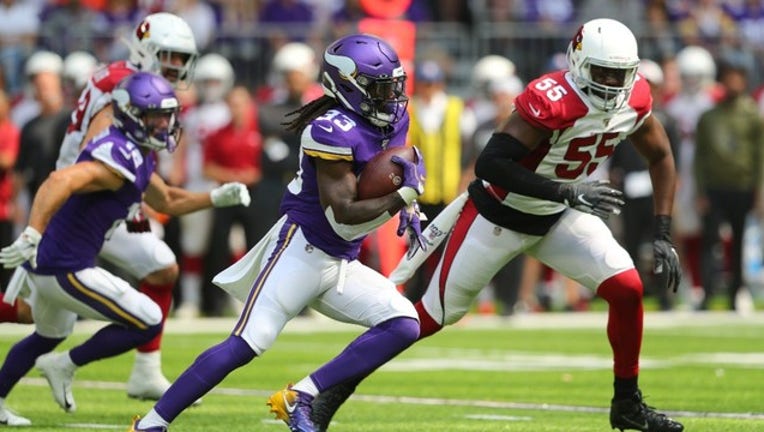 Dalvin Cook #33 of the Minnesota Vikings carries the ball for a touchdown in the first quarter of pre-season play against the Arizona Cardinals at U.S. Bank Stadium on August 24, 2019 in Minneapolis. (Photo by Adam Bettcher/Getty Images)

Cook had yet to play this preseason to avoid injury. He's played just 15 games the last two seasons due to knee and hamstring injuries, but was out on the field with the first-team offense in the first quarter on Saturday against the Arizona Cardinals. His first carry went for three yards, and took his second attempt 85 yards for a touchdown.

Cook wasn’t touched on the play until he was 15 yards down the field, shook one tackle and was off to the races with most of the 66,000-plus in attendance on their feet.

He spent the rest of the day on the bench, with Mike Zimmer and the coaching staff seeing what they needed to see. Cook’s 85-yard touchdown run is the longest for the Vikings in preseason history, and it’s the longest in the preseason since Jordan Todman went 76 yards for a score in August of 2012.

The Vikings beat the Cardinals 20-9 as Zimmer improved to 20-4 in the preseason with the Vikings.

The Vikings needed the run. It was about the only big play from the offense in the first half. Kirk Cousins was just 3-of-12 passing for 35 yards, and that’s after a 29-yard completion to Stefon Diggs late in the first half. Cousins was sacked twice, the first time that's happened in the preseason, and not on the same page with his receivers for most of the half.

Cousins finished the half with a 39.6 rating as the Vikings managed 130 yards of total offense. Zimmer was not happy after the game.

"Disappointing performance today. I felt like there wasn’t much energy. It was really a poor performance, and we need to play a lot better than that if we want to win football games," Zimmer said.

The Vikings had five drives Saturday with the first-team offense. The first ended with a Cousins incompletion to Diggs, the second was Cook’s touchdown. The third stalled after a screen pass intended for CJ Ham was nearly intercepted by Terrell Suggs. The fourth stalled on a sack, and they had a missed field goal after Chad Beebe dropped a pass.

Cousins didn’t have Adam Thielen with the first-team offense Saturday. Thielen did not play, but will be fine for Week 1. If the third preseason game is a dress rehearsal for the regular season, the Vikings have plenty to clean up before Sept. 8.

"We’ve got a long story to write here for the season. This will be ancient history as we get deep into the season and we’ll find out if it was a help or not. All I know right now without that benefit of hindsight is that if I play the way I did today, it’s going to be a long year," Cousins said.

Kyle Sloter led the Vikings on an 80-yard touchdown drive early in the fourth quarter, capped by Mike Boone's 7-yard scoring run. The Vikings went for two, and Sloter had Bisi Johnson open in the back corner of the end zone. Johnson caught it, but referees ruled after review he only had one foot in bounds.

Sloter had a second touchdown drive after rolling out and finding Khari Blasingame for a 15-yard score late in the fourth quarter. After Zimmer said earlier this week, "He needs to get a lot better," Sloter finished Saturday with a perfect 158.3 quarterback rating.

Kaare Vedvik converted the extra point on the Vikings' only touchdown of the first half, with Matt Wile holding. Vedvik tried a field goal from 47 yards out near the end of the first half, but missed wide left. He also tried a 54-yarder in the second half, and missed wide right. He finished 2-for-2 on extra points as Dan Bailey didn't kick at all.

Wile handled the punting duties as the Vikings continue to work on sorting out their specialists. If Zimmer was looking for any clarity in the kicking game from Saturday, he didn't get it.

"I honestly don’t know. Since we brought Vedvik in, Wile’s been punting good and Bailey has been kicking good. Then Vedvik goes out there and misses field goals, so I don’t know. I’m at a loss on that," Zimmer said.

Vedvik himself didn't have many answers for the misses after the game.

"You know right away. As soon as it comes off your foot, you know that it didn’t play out the way you wanted it to play out. One of those things," Vedvik said.

The Vikings’ first-team defense also got its first look at No. 1 overall pick Kyler Murray. The Oklahoma product showed his potential, going 14-of-21 passing for 137 yards with an 84.8 rating, but the Vikings kept him out of the end zone. The Cardinals managed three first-half field goals from Zane Gonzalez.

Ifeadi Odenigbo had Minnesota's defensive highlight of the first half, sacking Murray in the second quarter. Jayron Kearse had two pass break-ups early and appeared to have a fumble recovery, but the play was ruled down by contact. Zimmer challenged, and lost, though replays showed David Johnson fumbled before his knee hit the ground.

The Vikings were without Linval Joseph, who returned to practice this week, Brian O’Neill, who has missed practice with an injured elbow and safety Harrison Smith, who didn’t practice on Thursday. Minnesota sat eight players due to injury or rest.

The Vikings travel to Buffalo for their final preseason game Thursday night. They then must cut the roster to 53 players by next weekend.