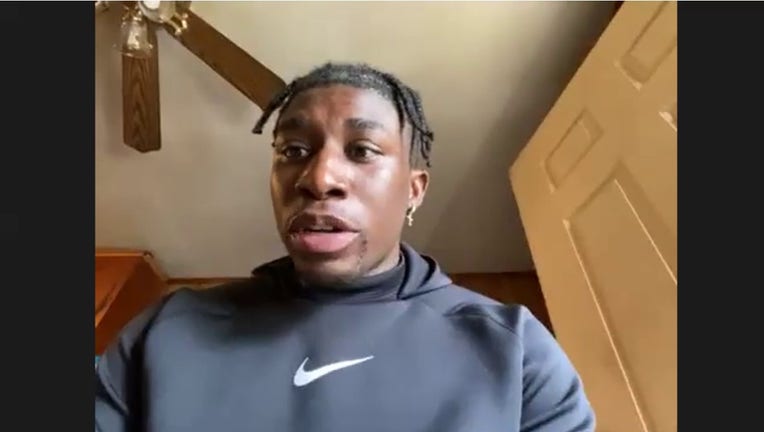 TCU defensive back Jeff Gladney talked Friday about being selected by the Vikings with the No. 31 pick in the NFL Draft on Thursday.

MINNEAPOLIS - TCU defensive back Jeff Gladney had a feeling he might end up with the Minnesota Vikings in the first round of the NFL Draft Thursday night, it just didn’t go down exactly as planned.

So you can’t blame Gladney if he got a little anxious when Vikings’ General Rick Spielman, instead of making a pick at No. 25, traded the pick down to San Francisco at the No. 31 spot along with more assets. When the Vikings were on the clock at No. 31, Gladney was still there, along with a few other defensive backs.

It was time for Gladney to have his moment.

“Exciting and anxious at the same time. Butterflies all in my stomach. I knew that was going to happen, I was just antsy waiting on my name to get called,” Gladney said late Thursday night.

Vikings coach Mike Zimmer loves drafting and coaching up defensive backs. He’s done it for years in the NFL, and he got one of his top targets Thursday night.

“When we called him, Pat gets him on the phone and he said ‘I’ve been waiting for you guys to call.’ That’s part of the things that you like about him. He’s a competitor and he wants to get out there and go,” Zimmer said.

Gladney considers himself a physical defensive back who doesn’t back down from anybody. TCU head coach Gary Patterson, among a slew of air-raid offenses in the Big 12, put Gladney against their opponent’s top receiver every game for two straight seasons.

Last year, Gladney played through pain and was a First Team All-Big 12 selection. He had 31 tackles, 1.5 tackles for a loss, an interception and led the league with 14 pass break-ups in 12 starts. Patterson calls him “country strong,” and says Gladney often plays 80 to 90 plays at a time. He recalled a practice where Gladney stepped in for injured players and played first, second and third-string team defense so practice could continue.

He’s also not afraid of a little tough love from coaches.

“Coach Zim will be a mild cat compared to here, let me just say that. Jeff’s going to be able to handle that,” Patterson said.

With the NFL Draft going fully-virtual due to the Coronavirus pandemic, Gladney spent Thursday night with his family in Texas. They had barbecue, did a fish fry and spent quality time together before it was time for the phone to ring.

The reality sunk in that he was heading to the NFL.

“It was great. A lot of tears, I ain’t even going to lie, my head started spinning for a little bit,” Gladney said.

He played through most of his final season at TCU with a knee injury, and waited to have surgery on a torn meniscus until after the NFL Combine. He wanted one more opportunity to show his speed and skill in front of NFL scouts.

“I was just trying to get myself seen by all the teams and let them know how much it meant to me. I’m tough like that,” Gladney said.

He’ll step into a defense that’s lost Xavier Rhodes, Trae Waynes, Mackensie Alexander, Jayron Kearse and Andrew Sendejo to the business side of the NFL. He’ll get his chance to earn immediate playing time.

He’s never been to Minnesota, but one fun fact about Gladney? The Texas native embraces cold weather.

“I like playing in the cold weather. I was always the weird one on the team that liked it when it was cold outside,” Gladney said.

He can play multiple spots in the defensive backfield, and calls himself the perfect fit for the needs the Vikings have. His hope is to prove Zimmer and Spielman right, with their investment of a first round draft pick on him.

“There are specific traits that you have to have to play corner in this defense, and Gladney fit every single trait we were looking for from a physical standpoint,” Spielman said.