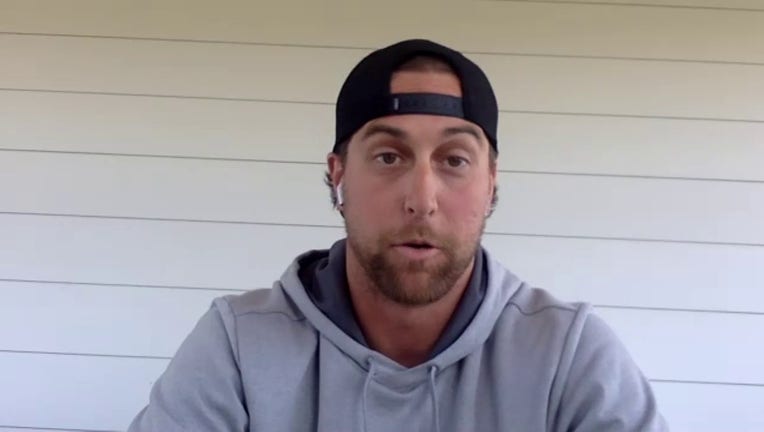 Vikings wide receiver Adam Thielen talked Tuesday about staying focused and positive despite the uncertainty around the Coronavirus pandemic.

MINNEAPOLIS - Adam Thielen has a sole focus of controlling what he can control and doing the best he can to stay in a positive frame of mind as he awaits word from the NFL to get back to “normalcy.”

The irony is palpable as the Coronavirus pandemic has most of the sports world shut down, and most of us wondering what the “new normal” will look like when the quarantine and self-isolation period ends. His days right now consist of participating in the Vikings’ virtual off-season program, getting outside with his two young boys whenever Minnesota weather allows and staying positive when the current situation around most of the world would give one every reason not to be.

Adam Thielen has a sole focus of controlling what he can control and doing the best he can to stay in a positive frame of mind as he awaits word from the NFL to get back to “normalcy.”

He considers his wife, Caitlin, his accountability partner in that respect.

“When this all started happening and stuff started getting shut down, we kind of just looked at each other and said ‘Hey, we’re going to make sure that every single day that we’re looking at the positives in this and not the negatives and the things that we can’t be doing now or how difficult things are for so many people.’ We’re just going to control what we can control,” Thielen told reporters via Zoom on Tuesday.

Thielen’s path to becoming one of the top receivers in the NFL is well-documented, and being a Detroit Lakes native is icing on the cake for Vikings’ fans. Thielen came to the Vikings as a Division-II standout, an undrafted college free agent in 2014. Fast forward to 2018, and Thielen had his second straight Pro Bowl season with 113 catches for 1,373 yard and a career-high nine touchdowns.

His career took a frustrating step back last year, battling a hamstring injury that caused him to miss five games and a cut on his heel in practice late in the season that forced him to play wounded in the playoffs at San Francisco.

He termed 2019 “a great opportunity to learn” and will be one of the Vikings’ key offensive leaders after Stefon Diggs was traded in the off-season. The move gave the Vikings an extra first round pick, which they used to draft LSU star receiver Justin Jefferson. The two have already formed a bond over text messaging and in team meetings as we all wait for answers surrounding the Covid-19 pandemic. It’s especially tough on rookies, who haven’t been on a football field in a formal setting since bowl games.

He anticipates a big year for Jefferson, who could be asked to fill a big void with Diggs gone.

“Honestly, I probably wouldn’t be in the NFL if this would’ve happened my rookie year. The best athletes, they can adapt and I think he’s taken advantage,” Thielen said. “He’s one of those guys, I see him smiling and joking around in these virtual meetings and knows his stuff when they ask him questions. He’s an adaptable person, that’s why he was able to be a zero star recruit and now was a first round draft pick in the NFL.”

There’s been a lot of talk about what football will look like when the game finally gets back on the field. The Vikings have had a virtual off-season to this point, holding position meetings, team meetings and installs via video conferencing. They work on positional drills on their own, and likely won’t have organized team activities or the mini camps that come before training camp later in the summer.

There’s a real chance training camp will be modified, and likely a scenario that if the regular season starts on time, it would have to be in stadiums with no fans. Thielen isn’t thinking much about any of that. He’s focused on being ready when the NFL gives the all-clear to open TCO Performance Center to players and staff. Roger Goodell announced last Friday that teams could open facilities on Tuesday if they followed state and local Covid-19 guidelines.

“I’m trying to control what I can control, that is not one of those things that I can control. I’m leaving it up to the professionals. When they say we can go back and we can start practicing, I’ll be there and I’ll be excited to be back,” Thielen said.

It wasn’t that long ago Thielen was a young NFL prospect fighting for a roster spot. He’s now entering his seventh season, aiming to be the veteran that rookies can lean on for advice, in football and life.

His focus? Preparing himself mentally and physically after last season’s frustrations, being a leader after he had to learn from others in his early NFL days and staying ready. Nobody knows when the NFL will make the call that it’s time to play, but the call will come. He’ll be ready, he says the best athletes are those that can adapt to anything.

“I’m going to be prepared to play a game tomorrow if I need to. Whatever they tell me that we have, whether it’s two weeks, a month, two months, I’m going to be ready for that situation. I’m just excited to get back out there so if they said we could play a game tomorrow, I’d be out there playing,” Thielen said. “I’m just excited to see the guys again, play ball and just get back to a little bit of normalcy.”