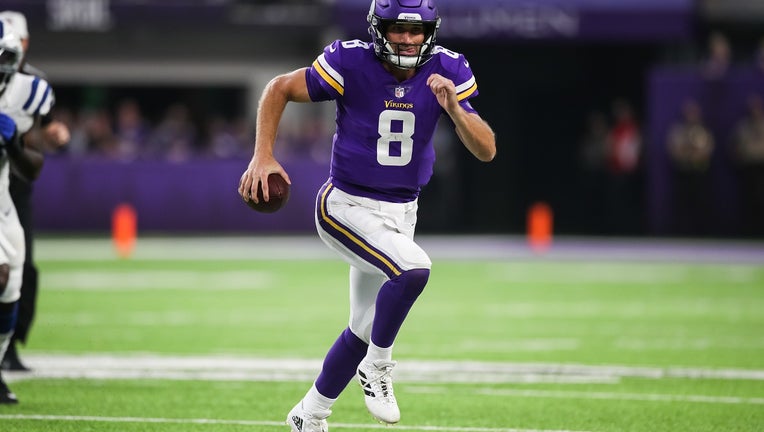 Kirk Cousins #8 of the Minnesota Vikings runs with the ball after getting pressured by the Indianapolis Colts in the second quarter of a preseason game at U.S. Bank Stadium on August 21, 2021 in Minneapolis, Minnesota. (David Berding / Getty Images)

MINNEAPOLIS (AP) - The Indianapolis Colts will pick a No. 2 quarterback between Jacob Eason and Sam Ehlinger, with the strong possibility they'll also be choosing a fill-in starter until Carson Wentz is ready to return.

Given their inexperience, the Colts aren't about to rush the decision.

Eason passed for 132 yards and directed two field goal drives, and the Colts beat the Minnesota Vikings 12-10 on Saturday night.

"There were some good things, and there were a lot of things to clean up," said Eason, who went 16 for 27 without a turnover.

Troy Dye returned an interception 33 yards for a touchdown to highlight a sharper showing by Minnesota's backups, one of two deflected-then-picked-off passes thrown by Ehlinger, the Indianapolis sixth-round draft pick. Ehlinger started and led two field goal drives in the first half.

Dye snagged the ball that was tipped at the line by Armon Watts and glanced off Parris Campbell's hands in the first quarter, running it in for the only touchdown the Vikings have in their two exhibition games.

Ehlinger was 8 for 13 for 70 yards, playing with about half starters and half backups. He was also intercepted by undrafted rookie defensive tackle Jordon Scott, who grabbed the ball after it glanced off wide receiver Ashton Dulin.

"We're both such young guys. We're trying to develop ourselves and learn as much as possible," Ehlinger said. "We understand this is a marathon, not a sprint, and hopefully we both are able to have long careers and this is just a small step in that journey."

Playing three safe series behind the starting offensive line, Kirk Cousins had his first action of this preseason for the Vikings and finished 5 for 7 for 23 yards. He was sacked once by first-round draft pick Kwity Paye, who beat left tackle Rashod Hill off the edge.

"I feel really good. I felt really clean tonight, as far as just seeing coverage and getting through my reads. I felt like we moved quickly. I felt like it was a really smooth operation, and that was encouraging," Cousins said.

The Vikings failed to convert 11 of their 13 third downs. Greg Joseph missed a 51-yard field goal wide right, the only time Cousins and company were in scoring range. Joseph later made a 49-yard try, after a possession with backup Jake Browning behind center.

Coach Mike Zimmer sounded at least mildly concerned by the overall performance from first to third string, and said he probably will play the starters on offense in the final exhibition. The Vikings have finished just six of 23 preseason possessions in opposing territory.

"We don't really have much rhythm going on there," Zimmer said.

Dye, the second-year linebacker from Oregon drafted in the fourth round, was one of several standouts among the second-string defense that Zimmer was so disappointed in after the first exhibition, a 33-6 defeat by Denver.

With the retirement this week of Cam Smith, who was trying to return after open heart surgery, the depth chart is wide open behind 2019 All-Pro Eric Kendricks, four-time Pro Bowl pick Anthony Barr and newcomer Nick Vigil.

The game was enough of a yawner even by preseason standards that the fans spiced up the wave late in the third quarter by tossing their souvenir programs in the air during their turn to stand, prompting two warnings from the public address announcer.

Colts: LG Quenton Nelson, who has the same type of foot injury as Wentz, remained out along with fellow OL starters Ryan Kelly (elbow) and Eric Fisher (Achilles). ... Backup DT Antwaun Woods hurt his hamstring in the first quarter and was ruled out for the rest of the game.

Vikings: WR Justin Jefferson was held out again, coming off a minor shoulder injury that occurred two weeks ago in practice. Barr (undisclosed) was also a spectator, as was rookie LT Christian Darrisaw (groin), who has fallen behind Hill on the depth chart. ... WR Adam Thielen played the first series but took a knee to the thigh during an incompletion and did not return.

Colts: at Detroit on Friday night.