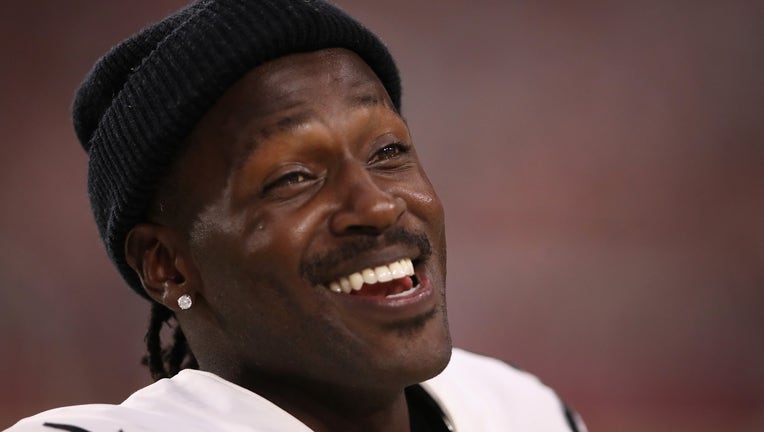 Wide receiver Antonio Brown signed with the New England Patriots Saturday, hours after he was cut by the Oakland Raiders before ever playing a game for the team.

Brown posted a photoshop on social media of himself in a Patriots jersey with the hashtags #godsplan and #rewritestory. The Instagram post was soon liked by New England receiver Julian Edelman, who already was splitting quarterback Tom Brady's attention with one troublemaking receiver, Josh Gordon.

The signing brought an official end to Brown's short, tumultuous time with the Raiders, which was marked by confrontations with General Manager Mike Mayock, a wiretapped phone call with head coach Jon Gruden, a cryotherapy session resulting in frostbite and an ongoing issue with finding the right helmet after his previous one was phased out by NFL.

Brown's agent, Drew Rosenhaus, confirmed the signing to The Associated Press. Brown had been scheduled to earn up to $50 million from Oakland over the three-year deal. Instead, the Patriots guaranteed him $9 million this season, with the potential to earn up to $15 million.

Brown had requested his release from the Raiders in an Instagram post earlier Saturday, which followed a self-promotional video he released late Friday that included a recording of a telephone conversation between himself and Gruden. The release request came in a fit of pique from Brown about his latest fine, over an outburst at Mayock during practice. That fine allowed the Raiders to void more than $29 million in guarantees over the next two years in Brown's contract if he wasn't on the team.

After receiving word of his release, Brown posted a video in which he yelled "free!" to the camera and ran outside while flapping his arms like a bird.

"We just exhausted everything," Gruden said. "We tried every way possible to make it work. All I'm going to say is, it's disappointing."

The Raiders traded two mid-round draft picks to Pittsburgh for the game's most prolific receiver and gave him a three-year contract worth $50.1 million that now is void; Brown could still file a grievance to recover the guaranteed money.

The moves on Saturday follow a week in which Brown posted a letter on social media detailing $54,000 in fines for missing team activities. (ESPN reported that he would be fined  a total of $215,073 for conduct detrimental to the team.)

Brown was banished for one day, then returned to the team and apologized in a meeting and in a brief public statement. Gruden said the plan was for Brown to play in the opener Monday night against Denver, but that changed after Brown requested and was granted his release.

NFL players needed to be on an active roster by 4:00 p.m. Saturday to play in this weekend's season openers, so Brown won't play against his old team, the Pittsburgh Steelers on Sunday night. He's most likely to get his first action against the Miami Dolphins on September 15. The deal reportedly can't be signed until Monday.

The Associated Press contributed to the report.

Get updates on this story from FoxNews.com