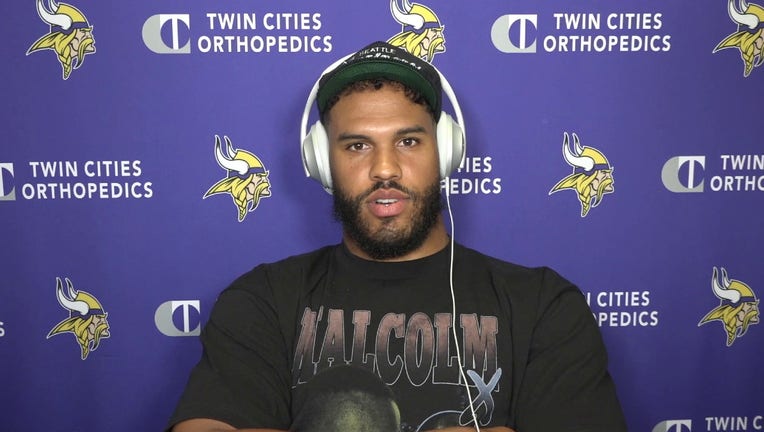 Minnesota Vikings linebacker Anthony Barr talked Wednesday about being back at OTAs after missing most of last season with a torn pectoral muscle.

MINNEAPOLIS - The Minnesota Vikings concluded their first week of organized team activities on Wednesday at TCO Performance Center in Eagan.

A majority of the team’s veterans were on the field working out for the only session of the week open to reporters. Those not in attendance for the voluntary workouts included Danielle Hunter, Cameron Dantzler, Jeff Gladney, Britton Colquitt and Hercules Mata’afa.

Hunter is working out on his own as he returns from neck surgery that kept him out of the 2020 season. Dantzler posted on social media he’ll be in the Twin Cities for workouts next week, Gladney is dealing with legal issues in Texas and Colquitt stepped away for personal reasons after being at workouts the first two days.

The team talked extensively after practice Wednesday about the importance of building a camaraderie, chemistry and being out on the field together for those who are there. Two players the Vikings were happy to see on the field, and for vastly different reasons, are Anthony Barr and Cameron Smith.

Anthony Barr was making a tackle on Indianapolis Colts’ running back Jonathan Taylor in Week 2 last year when something didn’t feel right. Little did he know it would be his last game of the 2020 season.

Barr went down with a torn pectoral muscle that required surgery, and it was the start of a tailspin for the Vikings’ defense. He was back at practice this week after agreeing to a restructured contract in the off-season, instead of testing the free agent market.

"I didn’t want to go out like that, my last being one in which I got hurt and missing an entire year. I really didn’t want that to be my last memory as a Minnesota Viking, so that played a big factor in returning," Barr said Wednesday.

Due to COVID-19 restrictions, Barr couldn’t be in team meetings, couldn’t attend games and had to do rehab largely on his own. He spent the better part of six months in isolation.

"Last year was tough for a number of reasons. Obviously I miss playing, I miss being with the guys. I think it was a year of learning and reflection," Barr said.

Barr, one of the leaders of the Vikings’ defense, is now back among a group that includes Michael Pierce, Patrick Peterson, Harrison Smith, Dalvin Tomlinson, Xavier Woods, Mackensie Alexander and Eric Kendricks. While Hunter is not at OTAs, Barr said he’s talked with him multiple times in the off-season. Hunter missed all of 2020 with a herniated disc in his neck.

Only the team knows if and when Hunter will return, which includes mandatory minicamp in mid-June.

"He’s going about things the way he thinks he needs to. I support him 100 percent. He’s a friend, obviously an incredible player and we’d love to have him whenever he does decide that it’s time to show up and get back to work. I know he’s grinding, he’s working, he’s feeling great and we’ll accept him with open arms," Barr said.

Cameron Smith couldn’t have been happier to be on the practice field at TCO Performance Center this week. Smith tested positive for COVID-19 last year, and while the pandemic has killed thousands, it saved Smith’s life.

Further testing showed Smith needed to have surgery to repair a bicuspid aortic valve. He went through a three-month recovery process, and the 2019 fifth-round draft choice missed the entire 2020 season. He said he wasn’t sure what returning to football would feel like until it happened, but it felt like home.

"I was excited to feel that again, but when it came down to it, it felt like I was just running out there like I hadn’t missed a beat. Like almost home again. It felt good again, it felt normal, it felt like this is where I belong," Smith said.

His teammates shared in his joy.

"That was something different. We prayed for Cam so much that he’s back here with us now, and that’s a miracle. That’s God that he’s out there just running with us now. I’m happy for him," running back Dalvin Cook said.

Smith said he never once thought he was done with football, nor did his own mother, who encouraged him during the recovery process to keep pushing forward. He got cleared back in March for practice, and is now competing for a spot on the roster.

"In my head I knew I was coming back and I never believed anything other than that. It’s helped throughout this whole process to have guys behind me and people with me on my side. I believed I was going to be here from the day the surgery was performed," Smith said.

The Vikings have two more sets of OTAs in the coming weeks before mandatory minicamp in mid-June.