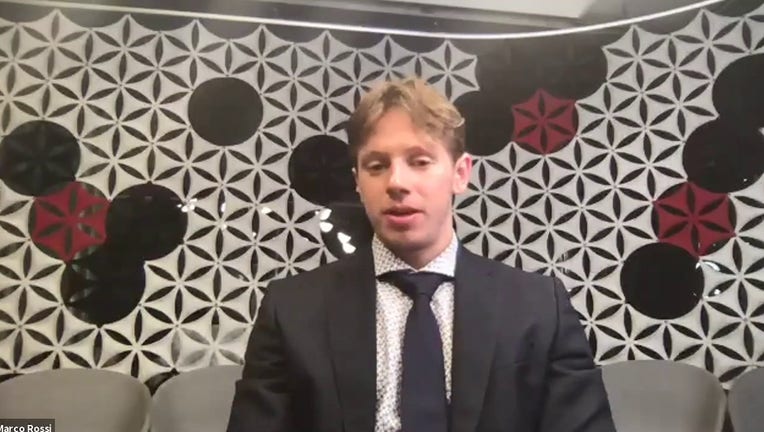 The Minnesota Wild drafted center Marco Rossi with the No. 9 overall pick in the NHL Entry Draft Tuesday night.

MINNEAPOLIS - The roster shuffling continues for the Minnesota Wild, right in the middle of the NHL Entry Draft.

Wednesday morning, General Manager Bill Guerin traded forward Luke Kunin and a draft pick to the Nashville Predators for forward Nico Bonino and the No. 37 and No. 70 overall picks. With the No. 37 pick, the Wild drafted center Marat Khusnutdinov. At No. 39, the Wild took defenseman Ryan O’Rourke.

The Wild’s splash came in the first round of the draft Tuesday night. With the No. 9 overall pick, they took center Marco Rossi out of Austria and the Ottawa 67s in the Ontario Hockey League.

Rossi was in his hometown in Austria to watch the draft, and it was nearly 3 a.m. local time when he addressed the media about his life-changing moment.

“I had some really good interviews with them and when it was their turn, I had a feeling for that so it was a perfect fit. I’m so happy,” Rossi said.

Rossi had 120 points, 39 goals and 81 assists, in 56 games with the Ottawa 67s last season. He led the OHL, and all players in the Canadian Hockey League, in assists and points. He was named the OHL’s Most Outstanding Player last season.

He considers himself a 200-foot player who plays hard and loves to compete.

“We’re extremely excited to have him. He was the guy that we had been targeting all along. On top of his skill, vision, playmaking ability, the drive that he has to be a great player is something that really got us excited about this player,” Guerin said. “We felt that he was the best player available at the time, and the fact that he’s a center, we accomplished what we wanted.”

Maybe most importantly, Rossi has no intention of starting his career with the Iowa Wild. He says he’s NHL ready right now.

“I like the fact that he has the confidence and that’s what he’s going for,” Guerin said.

To say it’s been a busy off-season for Guerin so far would be an understatement. He’s traded Kunin, Devan Dubnyk, Eric Staal and Ryan Donato. The Wild also did not offer a new contract to veteran and captain Mikko Koivu, who is still weighing his future options.