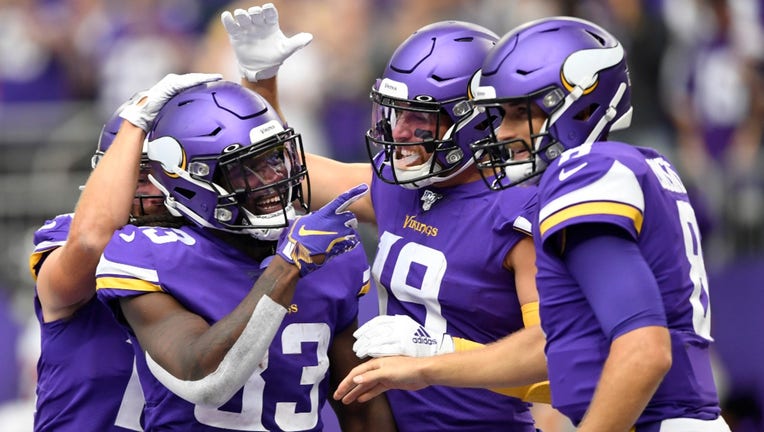 MINNEAPOLIS - The Minnesota Vikings open the 2021 regular season at Cincinnati on Sunday, and Week 1 is typically a time for high expectations and excitement.

Mike Zimmer seemed more uncertain and uneasy earlier this week. The reality is Zimmer doesn’t really know yet what the Vikings will look like on the field. On paper, they’re a playoff team. But many starters and veterans didn’t play in the preseason. The snaps they got came in scrimmages without tackling at TCO Performance Center.

Entering his 11th NFL season, but his first with Minnesota, Vikings cornerback Patrick Peterson is proving himself as a leader for a secondary that struggled in 2020.

There are plenty of questions facing the team heading into Sunday’s game against the Bengals, but here are five to start with.

IS THE OFFENSIVE LINE READY TO GO?

When the Vikings’ offense takes the field Sunday, the offensive line will feature Rashod Hill, Ezra Cleveland, Garrett Bradbury, Oli Udoh and Brian O’Neill. Rookie Christian Darrisaw just started practicing this week, working his way back from a pair of offseason surgeries. Udoh won a starting job with his play in training camp and preseason, and O’Neill signed a five-year, $92.5 million extension this week to solidify his future in Minnesota.

They need to create holes for Dalvin Cook, and give Kirk Cousins time to find Justin Jefferson, Adam Thielen and their other offensive weapons. There’s not a ton of depth after the starters on the offensive line, so they need to stay healthy. Their communication will also get tested in the first loud environment on the road in two years.

WHAT’S WITH THE CHANGE AT PUNTER?

The Vikings made plenty of roster moves to shuffle pieces around after setting an initial 53. One of the more puzzling moves was the release of punter Britton Colquitt. He’s a veteran, and while he didn’t have a great first preseason game, he bounced back in the last two games. The Vikings signed Jordan Barry to take over punting duties, and he’ll likely be the holder for Greg Joseph. Zimmer said Barry has a big leg, but needs to be more consistent. It’ll be interesting to see how Barry does against the Bengals.

HOW WILL THE REBUILT DEFENSE LOOK?

The Vikings’ additions to the defense were the top story of the offseason and into training camp. Michael Pierce is back after opting out of 2020, and Danielle Hunter is healthy. They added Dalvin Tomlinson, Sheldon Richardson, Everson Griffen and Stephen Weatherly to the defensive line. The Vikings have stars at linebacker in Eric Kendricks and Anthony Barr, but Barr’s status for Sunday remains uncertain.

If Barr can’t play, Nick Vigil likely gets a much bigger role. The secondary has a new look, with Patrick Peterson, Bashaud Breeland, Mackensie Alexander and Xavier Woods to have the biggest impact alongside Harrison Smith. Jeff Gladney is gone, and Cam Dantzler is buried on the depth chart. The Vikings need a much-improved defense after being hit hard by injuries and seeing rookies struggle last season.

ARE THE VIKINGS OFFENSIVE PLAYMAKERS READY?

The short answer is we don’t know, not even Zimmer does. Justin Jefferson didn’t play in the preseason after suffering a shoulder injury in practice, but he’s ready to go for Sunday. Adam Thielen played one series before suffering a leg injury, and has been limited to scrimmage action since. Dalvin Cook didn’t play in the preseason, for obvious reasons. Jefferson and Thielen combined for 21 touchdowns last year, and Jefferson would’ve been the Rookie of the Year if not for Justin Herbert. Cook was second in the NFL in rushing. If all three can be at the top of their game at the same time, it’ll be tough to slow down the Vikings.

CAN THE NON-VACCINATED PLAYERS STAY HEALTHY?

The Vikings became the face of the COVID-19 vaccine conversation during training camp, when Kellen Mond tested positive for the virus, and Kirk Cousins and Nate Stanley had to go into isolation protocols. It left Jake Browning as the team’s only quarterback available for a night practice at TCO Stadium. Even before camp, Rick Dennison shifted into an adviser role after refusing to get the vaccine. Dr. Allen Sills, the NFL’s chief medical officer, and Dr. Michael Osterholm each met with the team about the vaccine.

The Vikings have one of the lowest vaccination rates in the NFL, and Zimmer expressed his frustration over it multiple times. Ownership is concerned. It remains a real possibility that the Vikings could be without key players, or have to forfeit a game, if a positive case or an outbreak happens during the season. That won’t go over well for players not getting game checks, or coaches whose future might be on the line.

We’ll have a much better idea what the Vikings look like Sunday afternoon, so enjoy the ride.