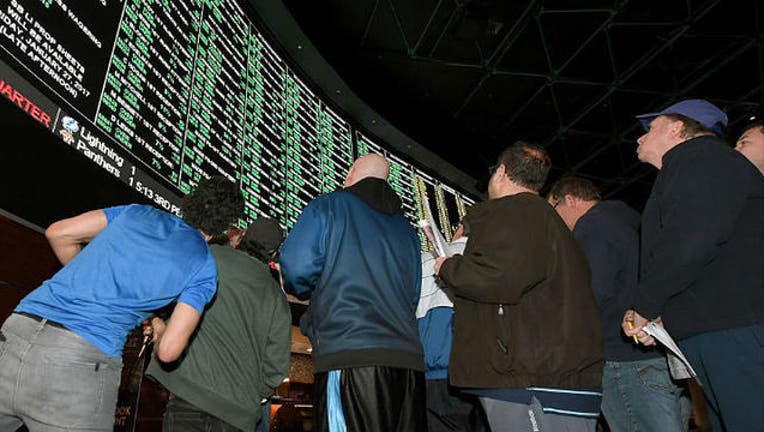 Bettors line up to place wagers after more than 400 proposition bets for Super Bowl LI between the Atlanta Falcons and the New England Patriots were posted at the Race & Sports SuperBook. (Photo by Ethan Miller/Getty Images)

ATLANTIC CITY, N.J. (AP) - A new report predicts 18 states will introduce bills to regulate sports betting this year, with 11 having a good chance of passing legislation.

The U.S. Supreme Court this year will decide a case brought by New Jersey that seeks to overturn a ban on sports betting in all but four states:  Delaware, Montana, Nevada and Oregon. A favorable ruling in that case could open the floodgates in terms of states adopting a new form of gambling.

"Assuming a Supreme Court decision or action by Congress permits it, we could see the largest simultaneous expansion of regulated gambling in U.S. history with sports betting in 2018," said Chris Grove, the company's managing director.

The court is expected by June to decide New Jersey's case, which seeks to overturn a ban on sports betting by any state that did not meet a 1991 deadline to legalize it. States and private companies in the U.S. and abroad are already moving quickly to position themselves for a favorable ruling.

Pennsylvania and Connecticut have already passed bills. Grove said Delaware is arguing that it doesn't need to pass a bill due to gambling legislation already on the books, and added Mississippi may not need to pass a bill. He said an argument has been made that that state's fantasy sports bill also authorized sports betting.

States across the nation are looking for new sources of revenue, and adding or expanding gambling is seen as an attractive option for many. While not vouching for the political likelihood of any particular state adopting gambling legislation, David Schwartz, director of the Center for Gaming research at the University of Nevada Las Vegas, said the predictions are "definitely in line with the historical trend of states turning more to gambling."

Sports betting is seen as most likely to be offered through commercial or tribal casinos, or state lotteries. Some analysts and industry observers also feel that a Supreme Court ruling legalizing sports betting nationwide would prompt a rapid expansion of internet betting, as states will move to allow it to be offered online.