A dunk into the zoo pool

A birdkeeper at a zoo in England took an unplanned dip in the penguin pool in icy conditions. (Source video from Cotswold Wildlife Park and Gardens via Storyful)

BURFORD, U.K. - Anyone who works at a zoo knows you sometimes face a few risks. Well, a zookeeper at a wildlife park in the United Kingdom wiped out on the ice and tumbled into a frigid pool full of penguins.

The folks at the Cotswold Wildlife Park and Gardens in Burford, England, had a good sense of humor about the accident. They released a video from a security camera showing the staffer's slippery mishap, which happened on Jan. 24.

"Experts believe that to avoid slipping on ice, you should walk like a Penguin," the zoo said in a Facebook post. "That didn't help one of our Bird Keepers who took an unplanned dip in the cold Penguin Pool recently."

The video shows the birdman, holding a yellow bucket and broom, sweeping snow off the deck near the edge of the pool and then losing his balance. He drops the broom as he falls into the water but somehow manages to hold onto the bucket, the video shows. He then pulls himself out of the pool and briefly leans on a railing before walking away, presumably to dry off and warm up.

"Please note: No penguins were harmed in the making of this video, although a keeper's pride was slightly damaged," the park said in the social post.

Cotswold Wildlife Park is home to many Humboldt penguins, according to its website. Native to coastal areas in South America, Humboldts are social birds: they live in colonies and tend to mate with the same partner for life. They can live for up to 30 years in captivity.

With Storyful. This story was produced from New York City. 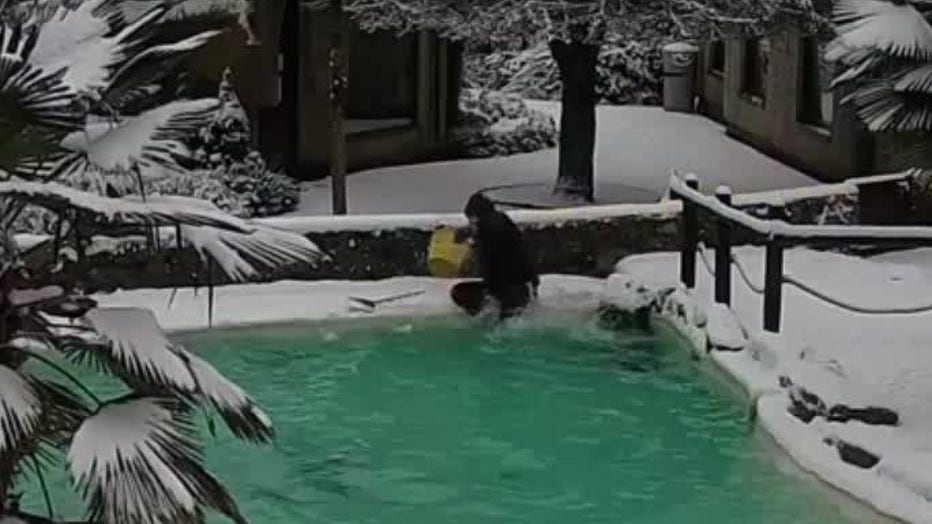 A bird keeper fell into a penguin pool. (Cotswold Wildlife Park and Gardens via Storyful)