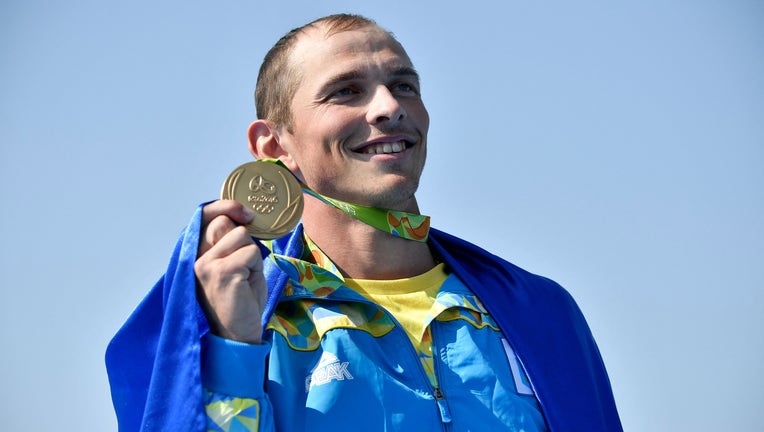 Ukraine's Iurii Cheban celebrates on the podium after the Men's Canoe Single (C1) 200m final at the Lagoa Stadium during the Rio 2016 Olympic Games in Rio de Janeiro on August 18, 2016. (Photo by JEFF PACHOUD/AFP via Getty Images)

One of Ukraine's most decorated Olympians is auctioning his medals — two golds and a bronze — in hopes of raising a six-figure donation to contribute to the war effort in his native land.

"My Olympic medals won’t matter if Ukraine can’t stand for this fight for freedom and independence," two-time canoe champion Yuri Cheban told The Associated Press in an email exchange Wednesday.

Cheban won Olympic gold in the 200 meters in 2012 and 2016 and a bronze in the 500 meters in 2008. SCP Auctions, which is conducting the sale, expects the gold medals to fetch in the neighborhood of $75,000 each, an impressive estimate buoyed by the relative scarcity of available recent medals, and also their meaning.

Cheban will give the proceeds to the Olympic Circle charity fund, a collection started by athletes and targeted toward helping the city of Mykolaiv, which isn't far from the recently liberated city of Kherson and also close to Cheban's home, the Black Sea port city of Odessa.

"I think a lot of people in the world don’t know the full extent of the situation in Ukraine," the 36-year-old Cheban said. "Right now, peaceful Ukrainian cities are without electricity, hospitals, schools, stores. People are freezing in their own apartments and some of my family is trying to live and work under these conditions."

In a speech before the United Nations, President Joe Biden gave a forceful condemnation of Russia's "brutal" war in Ukraine.

Cheban said the idea to auction his medals came from countryman Slava Medvedenko, a basketball player who auctioned off his two championship rings from his time with the Lakers (2001 and 2002) to fund the war effort. Medvedenko's rings sold for a total of more than $253,000.

Since the start of the war in February, Ukrainian athletes have been forced to train in different countries to prepare for major events. Last summer, 22 Ukrainian athletes competed at track and field world championships in Oregon. High jumpers Yaroslava Mahuchikh (silver) and Andriy Protsenko (bronze) won medals.

On Wednesday at its meetings in Rome, World Athletics presented one of its highest honors, the President's Award, to the Ukrainian Athletic Association. The federation's acting president, Yevhen Pronin, said Ukraine's presence at international meets was helpful in part because it gives "our sportsmen and officials a chance to communicate with media to let them know what's happening in Ukraine."

Cheban said he was "pessimistic" that sports alone can stop the attacks on Ukraine.

"But selling the medals of famous athletes can help save many Ukrainian lives and provide necessary equipment for the army," he said. "We need to be realistic."

The auction runs through Dec. 10.