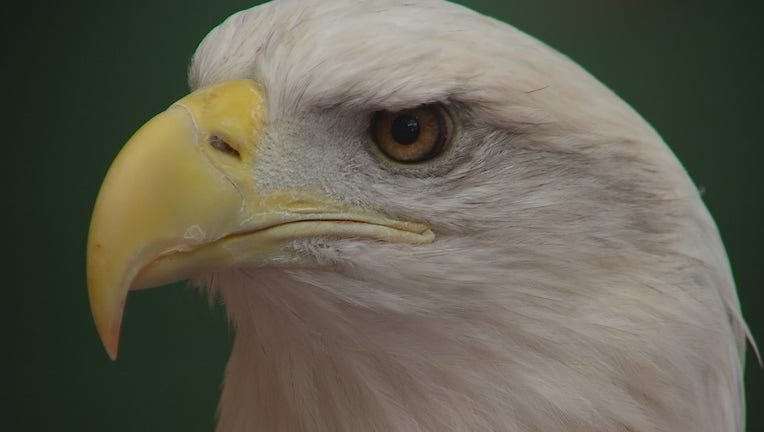 An eagle at the University of Minnesota's Raptor Center.

ST. PAUL, Minn. (FOX 9) - Minnesotans love to see eagles in the state, but more and more the majestic birds are requiring treatment for their injuries at the University of Minnesota's Raptor Center.

Although many of the eagles at Raptor Center are getting close to being released, the center has no doubt there will be others that come in to replace them. The center says it has been seeing more injured eagles coming in now than ever before.

Minnesotans love to see eagles in the state, but more and more&nbsp;the majestic birds are requiring&nbsp;treatment&nbsp;for their injuries at the University of Minnesota's&nbsp;Raptor Center.

Just a couple of weeks ago, the Raptor Center was treating the highest number of eagles ever at one time with 31. It wasn’t really a surprise as the number of eagles brought in for treatment has been going up for four years. Now, the center treats about 180 per year.

“I think it’s probably a combination of the population of eagles increasing and more and more they’re becoming adapted to living into near proximity to humans,” said Julia Ponder, executive director of the Raptor Center for the U of M.

When they are brought in, many of the eagles have been hit by a car or something else.

Sometimes, it’s lead toxicity, which now effects 25 to 30 percent of the injured birds. It usually comes from hunters who use lead ammunition and leave the carcass or remains behind.

She suggests using non-lead ammunition and really just being aware that eagles are close.

For now, the Raptor Center is ready to treat the injured eagles as they come in, but they are a lot of work.

It is worth it to heal them and have them fly free once again, according to the Raptor Center.

“With the large number of eagles coming into the Raptor Center, the resources here are being stretched very thing. Tomorrow is Give to the Max Day and the Raptor Center could sure use your help,” Ponder said.