Are EV batteries as green as they say? Yes and no

Eric Wachsman, professor at the University of Maryland and director of Maryland Energy Innovation Institute, weighs in on some of the reasons why some people are not totally behind electric vehicles.

WASHINGTON - As part of the rollout of a huge new climate, tax and healthcare law, the U.S. government is moving forward with its plan to award new tax credits to electric vehicle purchasers.

Several new websites launched Tuesday to help people identify which vehicles qualify for the credits. Based on data submitted to the National Highway Traffic Safety Administration, at least 31 new 2022 and 2023 models qualify for the tax credit. For starters, they must be made in North America to be eligible.

President Joe Biden signed Democrats’ landmark climate change and health care bill into law on Tuesday. It includes a tax credit of up to $7,500 that could be used to defray the cost of purchasing an electric vehicle.

But some models may exceed sticker-price limits in the complex law, and it remains to be seen whether automakers will be able to find minerals or manufacture batteries that can qualify for the credits.

Consumers can go to https://vpic.nhtsa.dot.gov/decoder/ and key in the 17-digit vehicle identification number of the EV they want to buy to make sure it’s made in the U.S., Canada or Mexico. The Treasury Department also released a frequently asked questions page on the new law’s provisions.

As of Tuesday, tax credits will no longer be available for vehicles assembled outside of the U.S., Canada or Mexico. But people who signed purchase contracts for EVs before Tuesday could still get the credits. The remaining electric vehicle provisions of the law are effective Jan. 1.

A Treasury official told reporters on a call Tuesday that the plan puts the U.S. 2030 climate goals within reach and will help ensure Americans can afford to buy an electric car.

Passage of the measure set off a scramble by automakers to speed up efforts to find North American-made batteries and battery minerals from the U.S., Canada or Mexico to make sure EVs are eligible for the credit. 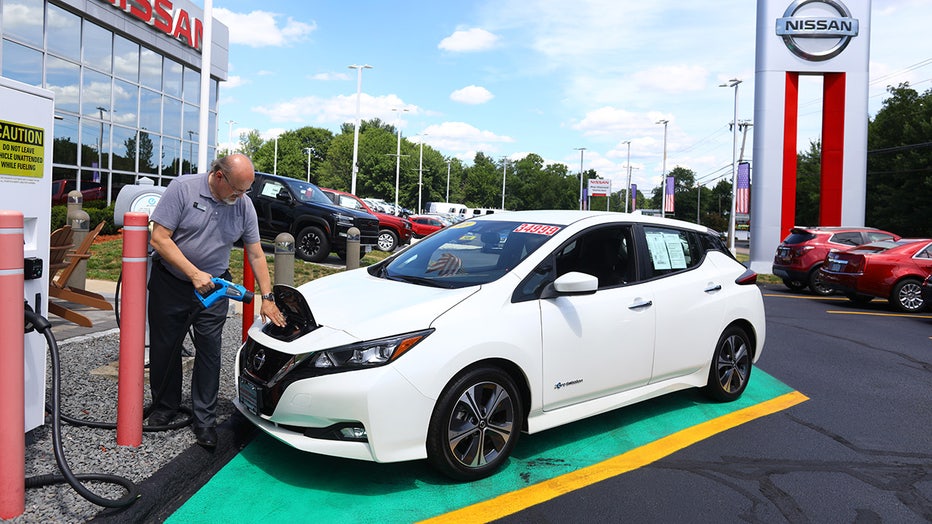 File: A 2019 pre-owned Nissan Leaf SV was the only electric vehicle on the lot at Milford Nissan in Massachusetts this summer. (Photo by Pat Greenhouse/The Boston Globe via Getty Images)

PREVIOUS: Gas vs. electric vehicles: Advantages of each car as gas prices soar

While automakers have been announcing U.S. battery factories and trying to secure domestic mineral supplies, a large industry trade association has warned that the vast majority of EVs now on sale in the U.S. wouldn’t qualify for the full credit under the Inflation Reduction Act.

"We are working overtime to localize our supply chains and ramp up production," Chris Smith, chief government affairs officer at Ford, said in a statement.

The credits are important because no automaker wants to be in a position of seeing a competitor sell vehicles at a $7,500 price advantage, especially since the credits largely target middle-class buyers.

"The No. 1 obstacle to EV adoption is cost," said Michelle Krebs, executive analyst with Cox Automotive. "So a $7,500 difference is significant on one vehicle compared to another for the part of the market that this is aimed at."

RELATED: These electric vehicles are cheaper to own than gas ones now

Under the law, an electric vehicle must contain a battery built in North America with minerals mined or recycled on the continent to be eligible for the credit.

And those rules become more stringent over time — to the point where, in a few years, it’s possible that no EVs would qualify for the tax credit, said the Alliance of Automotive Innovation, a key industry trade group. As of now, the alliance estimates that about 50 of the 72 electric, hydrogen or plug-in hybrid models that are sold in the United States wouldn’t meet the requirements.

Under the $740 billion economic package that Biden signed into law, the tax credits would take effect next year. For an EV buyer to qualify for the full credit, 40% of the metals used in a vehicle’s battery must come from North America. By 2027, that required threshold would reach 80%.

If the metals requirement isn’t met, the automaker and its buyers would be eligible for half the tax credit, $3,750.

A separate rule would require that half the batteries’ value must be manufactured or assembled in the North America. If not, the rest of the tax credit would be lost. Those requirements also grow stricter each year, eventually reaching 100% in 2029. Still another rule would require that the EV itself be manufactured in North America, thereby excluding from the tax credit any vehicles made overseas.

The idea behind the requirement is to incentivize domestic manufacturing and mining, build a robust battery supply chain in North America and lessen the industry’s dependence on overseas supply chains that could be subject to disruptions.

But production of lithium and other minerals that are used to produce EV batteries is now dominated by China. And the world’s leading producer of cobalt, another component of the EV batteries, is the Democratic Republic of Congo.

The tax credit would be available only to couples with incomes of $300,000 or less or single people with income of $150,000 or less. And any trucks or SUVs with sticker prices above $80,000 or cars above $55,000 wouldn’t be eligible, knocking many EVs out of the credits.

There’s also a new $4,000 credit for buyers of used EVs, a provision that could help modest-income households go electric.

The Treasury Department, which is administering the tax credits, said more guidance will be coming, and it was not in a position to say what vehicles will qualify for credits after all the law’s provisions are considered.