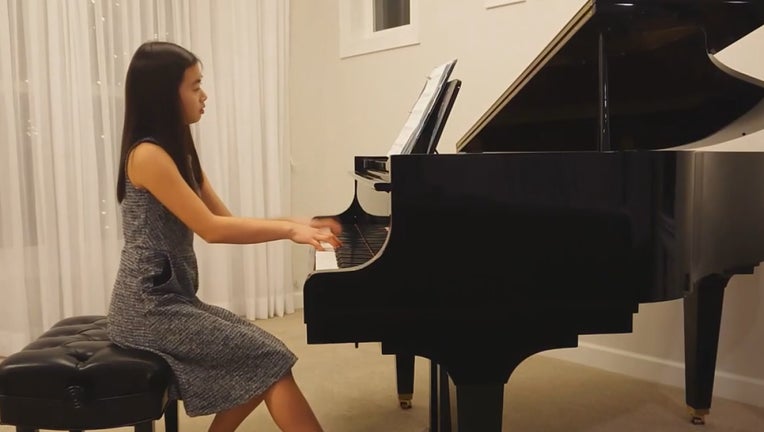 Tasha Piyabongkarn, a freshman at Wayzata High School, is bringing music to senior citizens virtually during the pandemic. (FOX 9)

WAYZATA, Minn. (FOX 9) - COVID-19 brought isolation to long-term care facilities during the pandemic, making them a quiet place to live.

"It’s been a challenge," said Georgiana Baldwin, a resident at Cherrywood Pointe of Plymouth.

A Minnesota high schooler is connecting with senior citizens virtually with music amid the isolating pandemic.

Now, a highschooler is filling that void at seven facilities in the west metro.

"It’s a way of communicating a message through those notes, and those rhythms, so the music speaks to me," Cherrywood Pointe of Plymouth resident Fred Hegele explained.

"I could just sit and just listen to her, a long time," Baldwin said.

The musician’s name is Tasha Piyabongkarn.

"It’s very soothing and I just enjoyed it," Baldwin added.

Piyabongkarn’s virtual piano concerts are gaining quite the following.

"They fill up pretty fast, I know I’ve got to get down and signup or it’s not going to happen because they’ll be all filled up," Hegele said.

"They’re really excited and I kind of have a fanbase going," Piyabongkarn said.

A fanbase that continues to grow for the musician in her freshman year at Wayzata High School.

"She is a very talented young lady," Baldwin said.

"For such a young adult to be so skilled and so graceful and so polished," Hegele said.

"I hope they feel excited, maybe more connected," Piyabongkarn said. "Maybe some memories come back to them."