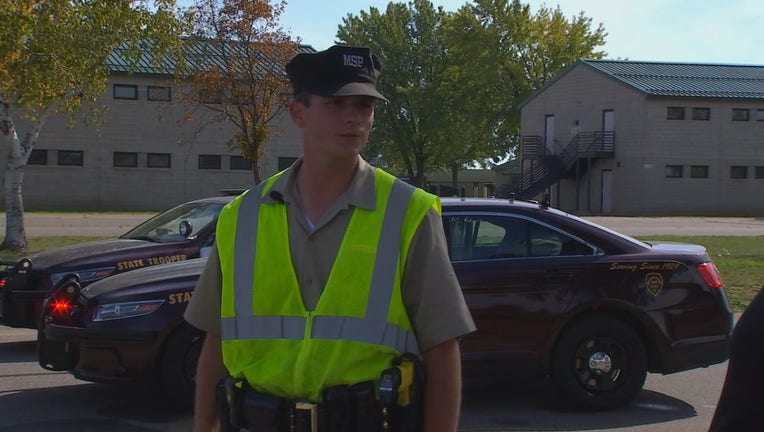 A Washington County Explorer is poised to become a Minnesota State Trooper.

HUGO, Minn. (FOX 9) - A Hugo, Minnesota man is on the doorstep of a lifelong goal to serve and protect as a member of law enforcement.

Andrew Schommer is currently attending the Minnesota State Patrol Training Academy at Camp Ripley, but he’s been serving his community for years well before ever putting on a badge.

A Washington County Explorer is poised to become a Minnesota State Trooper, a dream he's had for a long time.

The training academy is focused on real-life role play with more than three months of various scenarios, situations and coaching to prepare future troopers for everything they may face out in the field.

"They test us phiscally, mentally and emotionally," Schommer said.

He is learning any chance he gets, now just a few weeks away from graduating and finally getting that badge pinned to his chest. Schommer committed to a career in law enforcement from an early age. His desire to serve, protect and to help others was on full display about eight years ago during a desperate search for an elderly neighbor who had gone missing in his hometown of Hugo.

"Saving lives every single day, that’s what I want to do," he said.

In July 2013, hundreds of searchers, volunteers and law enforcement officers were combing the neighborhood for days looking for Ray Novakovic.

Novakovic’s family was distraught, just wanting closure when a 14-year old boy—a Washington County Explorer at the time—was drawn to some swampy weeds that appeared disturbed. Upon further inspection, it was the 78 year old.

Novakovic was dead, but that young man, Schommer, had provided the family and community some peace of mind.

"I thought he needed to get found, so I went out there and searched." Schommer told FOX 9 in 2013.

Schommer promised FOX 9’s Paul Blume that day that he would grow up to wear the uniform. It was his dream.

Schommer has never forgotten that experience. It fueled his journey to the State Patrol.

"Bringing that closure to the family and friends, and giving the feeling you just helped out the whole community, that’s what solidified my thought of going into law enforcement."

At a time when agencies are having difficulty with recruiting, the State Patrol’s second in command told FOX 9 they need more people like Andrew Schommer.

"If you’re so inspired by something which in his case was a situation where he was hoping to help somebody," Lt. Col. Rochelle Schrofer said. "If you’re inspired by that, if you want to contribute to actually making a difference, a direct impactful difference, think about a career in law enforcement."