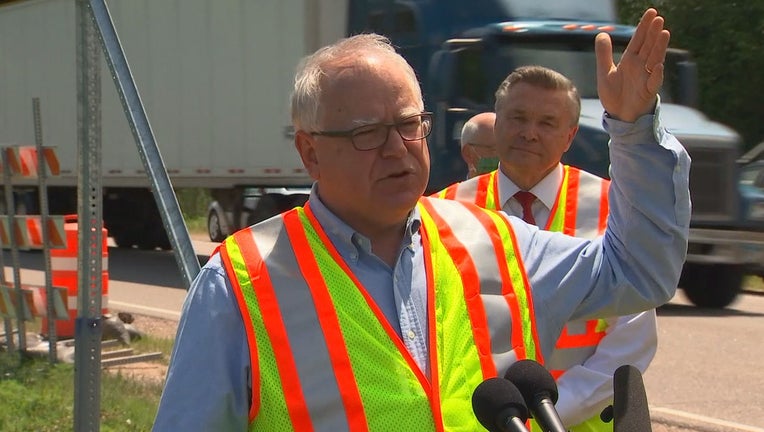 HENDERSON, Minn. (FOX 9) - Gov. Tim Walz and lawmakers debated the long-stalled $1.9 billion bonding and tax bill by the side of the road Thursday in Henderson, where one project would alleviate flooded-out roads.

Walz, lawmakers and key administration officials spoke on the side of Highway 93, which floods almost every year. Behind them, a sign displayed a series of high-water marks. A $24.8 million proposal would raise the height of the road by eight feet.

Gov. Tim Walz and lawmakers debated the long-stalled $1.9 billion bonding and tax bill by the side of the road Thursday in Henderson, where one project would alleviate flooded-out roads.

Lawmakers could vote on the fix, which is included in the state's bonding bill, as early as next Monday. But House Republicans are blocking it, trying to get Walz to end some of his executive orders meant to fight the coronavirus pandemic.

"This is the point where it’s at. I wish that it wouldn’t be tied to the bonding bill, but it is," Walz said.

The first-term Democratic governor told reporters he was willing to give up 30 of his executive orders -- he's issued 79 of them since March -- to free up the bonding bill. Walz said he also asked House GOP lawmakers to support a statewide mask mandate, but they had declined.

The Legislature is currently in special session, but legislative leaders broke for the rest of the week in hopes of getting a deal in the coming days.

"This project is on the five-yard line. We just have to punch it into the end zone," said state Rep. Glenn Gruenhagen, R-Glencoe, who represents the area. Gruenhagen told reporters at the news conference that he supports the Henderson road-raising project but also wants Walz to modify his emergency powers.

Myron Frans, the state's budget commissioner, said getting a deal by Monday was critical or construction projects would be delayed.

Without legislative action, the state would have to delay two planned bond sales in August, which would jeopardize several ongoing projects, he said.

"We have current projects that need cash now this fall," Frans said. "If we don’t get the money from our sale, they would have to stop those projects."

The giant bill includes $1.35 million in new borrowing, $300 million from highway trunk bonds, roughly $200 million in other spending, and a series of tax breaks. The biggest break would allow businesses and farmers to deduct equipment purchases immediately on their taxes, lining up Minnesota with federal law.

But Walz described the negotiations as a "house of cards" because lawmakers are trying to pull together several issues.

Several local supporters of the Henderson project came out to urge Walz and lawmakers to act. But the project also has some detractors, who said they favored a separate plan to rebuild Highway 19 east of Henderson.

They also raised concerns about the two-year construction schedule. The work would begin in 2023 if funding is approved this year, transportation commissioner Margaret Anderson Kelliher said.