Gov. Tim Walz and Dr. Scott Jensen sparred over the state's COVID-19 response, the economy, and rural issues during their first — and, for now, only — face-to-face meeting.

MORGAN, Minn. (FOX 9) - Gov. Tim Walz and Dr. Scott Jensen sparred over the state's COVID-19 response, the economy, and rural issues during their first — and, for now, only — face-to-face meeting.

A standing room-only crowd packed the main barn at FarmFest, the yearly celebration of agriculture in southwest Minnesota, where politicians traditionally visit to show their interest in farm issues. Election years give added weight to the event.

Walz, who stayed seated for most of the 80-minute forum, highlighted his administration's efforts while casting Jensen as an inexperienced second-guesser. Jensen criticized Walz's record and gave all of his answers standing up, playing to a crowd that leaned in his favor.

When Jensen said Walz's policies have made his One Minnesota slogan "far less a reality," the first-term Democrat shot back, "I believe in it more than ever."

Gov. Tim Walz and Dr. Scott Jensen sparred over the state's COVID-19 response, the economy, and rural issues during their first — and, for now, only — face-to-face meeting. A standing room-only crowd packed the main barn at FarmFest, the yearly celebration of agriculture in southwest Minnesota, where politicians traditionally visit to show their interest in farm issues. Election years give added weight to the event.

Walz turned to the economy, pointing to Minnesota's 1.8% unemployment rate, the lowest of any state since recordkeeping started in 1976.

Jensen said Walz was cherry-picking economic data without considering inflation, which is at a 41-year high.

"If you got the biggest raise you've gotten in three years at 5% and you're falling behind because inflation is 9.1%, then frankly the 1.8% (unemployment rate) doesn't really matter," said Jensen, a family physician from Chaska. "That's a false metric."

Walz told reporters afterward that he expects to have "a couple" more debates, while Jensen said he wants to debate the governor every two weeks.

The FarmFest forum leaned heavily on agriculture and rural issues, but that didn't stop both candidates from veering into COVID and crime topics. 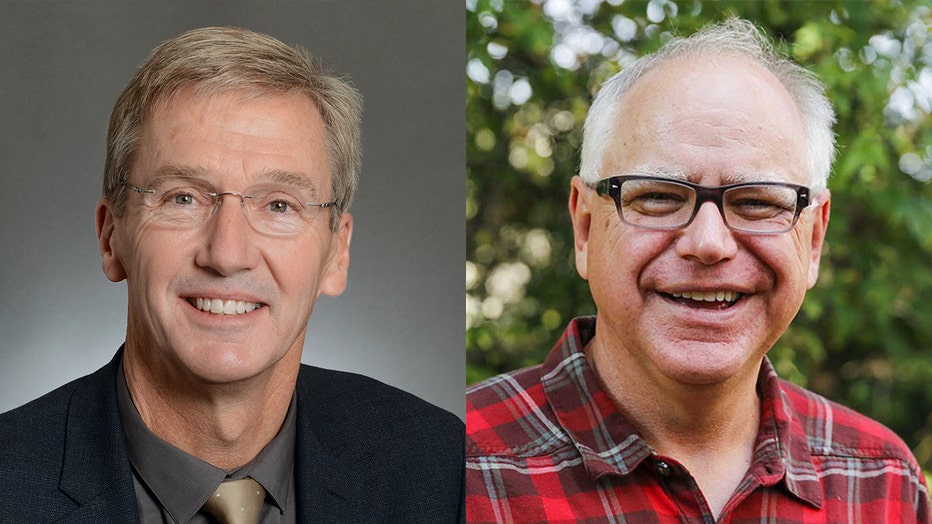 Walz, whose first term has been dominated by his response to the pandemic, said his administration worked quickly to provide emergency relief to long-term care facilities during the omicron wave last winter while streamlining the process for certified nursing assistants to get training.

"It is the model for the rest of the country. It’s been held up by the National Governor's Association," Walz said. "We trained 1,500 CNAs. We pulled folks who were on the sidelines. We made the process simple, and we have them out there."

Jensen responded: "Let’s be clear. There is nothing about our response to COVID in regard to our seniors, the frail, the elderly, assisted living, or nursing homes that would be a model for the United States."

Early in the pandemic, Walz twice issued executive orders that forced thousands of businesses to temporarily close to in-person customers as he tried to slow the virus's spread. Jensen has made that decision a centerpiece of his campaign.

Walz returned fire, telling Jensen, "You can have wishful thinking and hope COVID isn’t real and take ivermectin, but that is not where the facts are and as governor you have to deal with that."

Jensen is not vaccinated and has claimed he has immunity because of a previous infection more than a year ago.

On the economy, Jensen this week started calling for a reduction in Minnesota's estate tax, saying that would help farmers as their land values increase.

In turn, Walz criticized Jensen for opposing an end-of-session budget deal that included $4 billion in tax breaks and $4 billion in new spending. With the legislation in limbo, Jensen in May urged Republican lawmakers to "hold the line" against the deal.

"Scott asked Republicans to step away so it would look like it didn't get done," Walz said. "That's what's broken about government. That's the game being played on this."

Walz said he hadn't raised any taxes as governor. But he did propose several, including a 20-cent gas tax increase in 2019 that legislative Republicans blocked.

The two later sparred over the Walz administration's decision to implement tougher vehicle emissions standards, a move Jensen has pledged to roll back as governor.

Following California's lead, Minnesota car dealers will have to carry more electric vehicles and hybrids on their lots starting with the 2025 model year.

Walz said climate change was making the world a "hungry, hotter, more disruptive" place and said the state Legislature should consider creating a permanent drought relief fund so farm aid doesn't get caught in politics at the state Capitol.

In contrast, Jensen said he wanted lawmakers to send more infrastructure funding to local governments without strings attached so they could spend it on whatever initiatives they chose.

"The fact is, I think there’s climate change. It’s gradual. It’s slow. I think we have to be nimble," Jensen said.

Minnesota DFL Gov. Tim Walz has nearly nine times as much cash in his campaign bank account than Republican rival Dr. Scott Jensen, giving Democrats an advantage as they seek to continue their long winning streak in statewide elections.

Walz has significantly outraised Jensen and had nearly $5 million in the bank as of mid-July, nearly nine times more than his Republican rival's $580,000 on hand.

Jensen told reporters he's had no contact with former President Donald Trump, who is coming to Wisconsin this week to campaign ahead of that state's Aug. 9 Republican primary for governor.

"I don’t even know where it is, but I’ve been to Disney World," Jensen said, when asked if he's been to Mar-a-Lago to meet with Trump. "I’ve never met him, never had direct contact with him."

Jensen used his closing comments to raise a topic that hadn't been raised during the forum: Walz's response to the 2020 riots that followed the police murder of George Floyd.

Jensen said, had he been governor, the Minnesota National Guard would have been on the streets sooner. Walz initially sparred with Minneapolis Mayor Jacob Frey over the Guard but eventually called up the entire Guard for the first time since World War II.

Walz, who previously was in the National Guard, said it was another example of Jensen second-guessing.

"Having served 24 years in the National Guard, that’s a lot more experience than watching Top Gun Maverick and second-guessing where our men and women are putting themselves at risk," he said.