Walmart to stop selling e-cigarettes at its stores

﻿A total of 530 people have been diagnosed﻿ with vaping-related illnesses, but the cause remains unknown, according to U.S. health officials.

BENTONVILLE, Ark. - Walmart will stop selling e-cigarettes at its U.S. locations amid growing “regulatory complexity” and “uncertainty” regarding the products that have recently come under scrutiny, according to a company memo.

“Given the growing federal, state and local regulatory complexity and uncertainty regarding e-cigarettes, we plan to discontinue the sale of electronic nicotine delivery products at all Walmart and Sam’s Club U.S. locations,” the company said in a memo obtained by Yahoo Finance. “We will complete our exit after selling through current inventory.”

A total of 530 people have been diagnosed with vaping-related illnesses, but the cause remains unknown, according to U.S. health officials.

RELATED: Mom of 3 put into medically-induced coma with severe lung condition after vaping

The Centers for Disease Control and Prevention on Thursday said confirmed and probable cases have been reported in 38 states and one U.S. territory. The total number of illnesses is up from 380 a week ago.

Seven deaths have been reported, the first of which occurred in Illinois late last month. 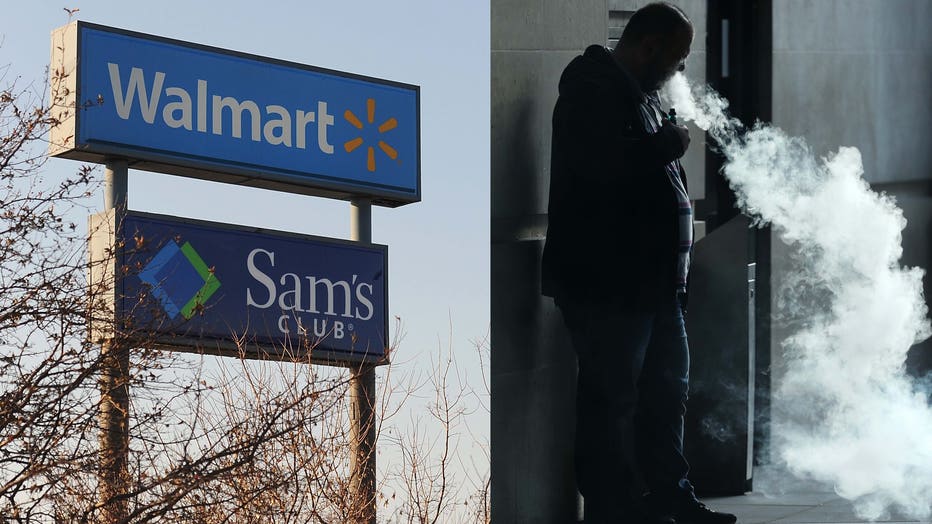 Walmart said in a memo that it would discontinue the sale of e-cigarettes at all Walmart and Sam’s Club locations in the U.S. (Photo credit: Michael B. Thomas/AFP & Yui Mok/PA Images / Getty Images)

The agency said it continues to work closely with the U.S. Food and Drug Administration to test the substances in e-cigarette products used by case patients and to collect information about patients’ recent vaping.