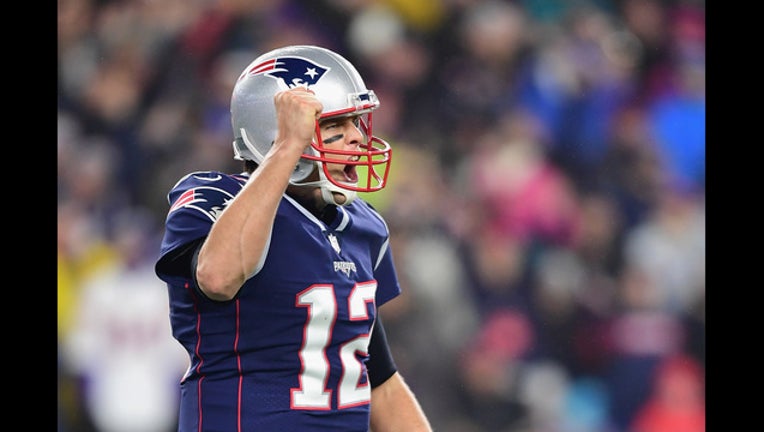 FOXBOROUGH, MA - DECEMBER 02: Tom Brady #12 of the New England Patriots celebrates after a rushing touchdown by James Develin #46 (not pictured) during the fourth quarter against the Minnesota Vikings. (Photo by Billie Weiss/Getty Images)

FOXBORO, Mass. (AP) - The Patriots have thrived in the final month of the season since Bill Belichick and Tom Brady's arrival.

They're hoping their 24-10 victory over the Vikings is the start of another memorable December.

Tom Brady passed for 311 yards and a touchdown, Bill Belichick earned his 250th victory, including playoffs, as Patriots coach in Sunday's victory over Minnesota.

Including his 37 regular-season and postseason wins with the Browns, Belichick has 287 wins overall.

Brady completed 24 of 32 passes and has 579 touchdown passes, including the playoffs, tying him with Peyton Manning for the most all time. He also has 508 regular-season TD passes, which ties him with Brett Favre on the career list. Manning is first with 539 and Drew Brees is next with 518.

"Seven guys running, eight guys catching -- that makes it hard for them to defend us," he said. "Hopefully we can keep it going."

The Patriots (9-3) have won eight of nine since starting the season 1-2. Belichick improved to 65-13 in December. Brady is 59-11. Both marks are NFL records for the most wins during that month for a coach and player.

The Patriots have clinched their 18th straight winning season. It is the second-longest streak in NFL history. The record is held by the Cowboys at 20 seasons from 1966-85.

Minnesota (6-5-1) has lost two of its past three. The defeat prevented Minnesota from gaining ground on the NFC North-leading Chicago Bears, who lost 30-27 in overtime to the New York Giants.

The Vikings entered the game allowing the third-fewest rushing yards in the league (93.6 per game). But New England was able to spread them out, rushing for 160 yards.

Kirk Cousins kept Minnesota in the game early, before faltering down the stretch. He finished 32 of 44 for 201 yards and touchdown but had two late interceptions.

Brady improved to 5-0 against Minnesota, one of five teams (Atlanta, Chicago, Dallas and Tampa Bay) he has a perfect regular-season record against.

With New England leading 10-7 in the third quarter, Stephen Gostkowski missed a 48-yard field-goal attempt wide right at the 6:26 mark. It snapped a streak of 35 straight makes in the regular season of less than 50 yards, going back to October of last season.

The Vikings tied the game on the ensuing series with Dan Bailey's 39-yard field goal.

But the Patriots bounced back, needing just four plays for Brady to cap a 75-yard drive with a 24-yard touchdown pass to Josh Gordon that put the Patriots back in front 17-10.

Following Minnesota's punt, the Patriots picked up where they left off. This time they needed only six plays to set up a 2-yard TD run by Develin that made it 24-10.

The Vikings survived a challenge by Belichick of a spot on a fourth down rush by Latavius Murray on their next possession. Belichick's challenge led to a brief verbal exchange between him and receiver Adam Thielen. It included linebacker Kyle Van Noy coming to his coach's defense.

"Everybody's out there battling," Patriots safety Devin McCourty said. "Sometimes football comes down to a yard. ... But Bill's fiery. We see it every day."

But facing a fourth-and-11 seven plays later, the Vikings turned it over on downs after Cousins' pass to Laquon Treadwell came up short.

Thielen said it's a wakeup call for the Vikings.

Minnesota got the ball back quickly after Brady threw his first interception in five games to Eric Kendricks. But a pass into the end zone by Cousins was tipped by J.C. Jackson and intercepted by Duron Harmon .

"Every guy on the offense, they're hungry. You know, just like the defense. We're all hungry," Patriots receiver Cordarrelle Patterson said. "We all know our role and we embrace it."

Minnesota coach Mike Zimmer pulled out his red challenge flag at just the right time late in the first half to help get his team on the scoreboard.

The Vikings successfully challenged the referee's spot after an apparent first down completion to Rob Gronkowski. It left the Patriots with a third-and-1 on their 26.

Minnesota stopped the ensuing run by James White and New England was forced to punt.

Cousins went to work in the two-minute offense, opening Minnesota's drive with completions of 24 and 23 yards to Stefon Diggs and Kyle Rudolph. He added another 10-yard completion to Diggs four plays later to set up a 5-yard touchdown pass to Thielen that trimmed the Patriots' lead to 10-7 at the half.

Brady reached another milestone: 1,000 yards rushing in his career.

Brady hit the mark on a 5-yard scramble in the first quarter. He slid to a stop, popped to his knee and signaled for a first down.

He finished with two rushes for 5 yards. He avoided losing a yard when he kneeled down on the final play of the game .

Never considered much of a mobile quarterback, it took Brady 19 years and 265 games to reach the 1,000-yard milestone -- the most by a player since the merger. At 41, he is also the oldest player to reach 1,000 career rushing yards since 1970.

Vikings: CB Trae Waynes was evaluated for a concussion in the second quarter and ruled out for the rest of the game.

Patriots: S Patrick Chung was helped off the field in the fourth quarter.

Vikings: At Seattle for "Monday Night Football" matchup on Dec. 10.

Patriots: At Miami next Sunday.