How COVID-19 has impacted organ transplants

SEATTLE - A Department of Veterans Affairs respiratory therapist has been charged with stealing medical supplies used to treat patients with COVID-19 and selling them on eBay, according to a news release by the U.S. Department of Justice.

Gene Wamsley, 41, allegedly stole respiratory support equipment from the Veterans Affairs Medical Center in Washington and was formally charged by the U.S. District Court in Seattle on June 17.

Wamsley was employed as a respiratory therapist at VAMC until he was placed on leave on June 9.

“Right now respiratory support equipment is critical in medical care for those suffering with COVID-19 infections. To steal and sell equipment needed to care for our veterans is a shocking betrayal,” said U.S. Attorney Brian T. Moran.

An investigation into Wamsley began in January 2020 after two VAMC staff members reported several bronchoscopes missing from the hospital that were later found listed for sale on eBay from a seller in Bonney Lake, Washington. Three ventilators were also found missing from the same hospital during the same time period.

Upon further investigation, the eBay account that had the medical supplies listed was eventually linked to Wamsley. Further review of his eBay records showed a variety of other respiratory equipment sold by the same account linked to Wamsley and were later confirmed by VAMC administrators as items used in their respiratory therapy department.

On June 9, the same day Wamsley was placed on leave from the VAMC, a court authorized search warrant was executed by law enforcement to search his home in which medical supplies and eBay sales records were seized.

Wamsley faces charges with a potential penalty of up to 10 years in prison for theft of government property. 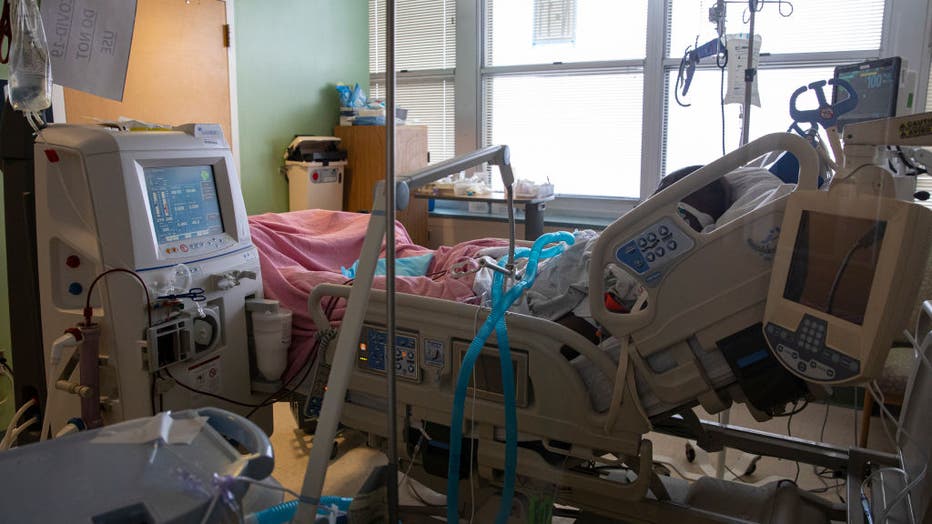 FILE - A COVID-19 patient using a ventilator rests on an Intensive Care Unit (ICU) at a VA hospital. (Photo by Robert Nickelsberg/Getty Images)

Wamsley’s alleged theft of key medical supplies for coronavirus patients comes as the Veterans Affairs Department on June 9, acknowledged its current COVID-19 supplies may not be enough to handle a second wave of the deadly virus.

Dr. Richard Stone, the top health official at the VA, said at the height of the pandemic so far, its 170 medical centers were going through 250,000 N95 masks per day — a “daunting amount.”

Now, the VA has about a 30-day supply of gear, including masks and gowns, but it really needs a 60-day supply, he said, partly to address growing demands as the VA moves to fully reopen its medical centers due to the easing of stay-at-home orders nationwide.

To handle a possible second wave of COVID-19, it would need a six-month supply.

“A future pandemic wave may test all of us in our preparation,” Stone told the Senate Veterans Affairs Committee.

Noting that the VA is currently spending $100 million per month for personal protective equipment compared with $10 million per month before the pandemic, Stone said the U.S. manufacturing base needs to boost production to help meet the needs of every hospital system “in the country and the world.”

Sen. Jerry Moran, R-Kansas, who chairs the committee, and Sen. Jon Tester of Montana, the panel’s top Democrat, urged President Donald Trump earlier this month to include the VA in the administration's Defense Production Act Committee. Democrats in particular point to a broken supply chain and say Trump should invoke the DPA to ensure that the VA, which has the nation’s largest hospital system, gets the medical supplies it needs.

As of June 9,  the VA had reported 1,665 staff cases of COVID-19, including 133 that were considered “active.” At least 33 VA employees have died of the virus, according to VA data.

The Associated Press contributed to this story. This story was reported from Los Angeles.