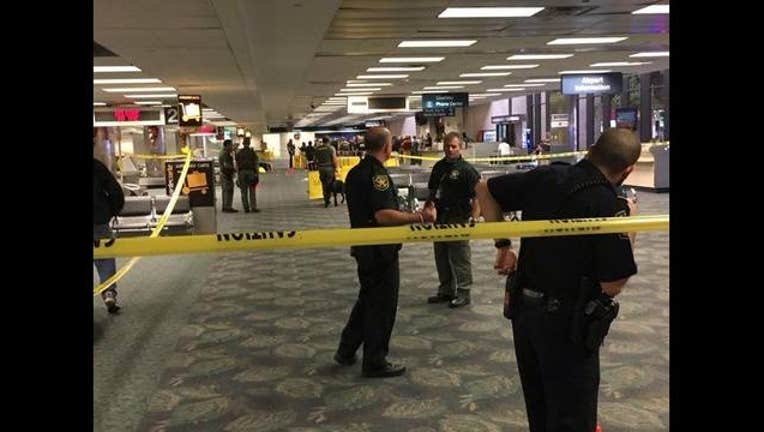 Florida hospital officials say one of the airport shooting victims is expected to be released.

Six gunshot victims were brought to Broward Health Medical Center after Friday's shooting in which five others died. Officials said Saturday at a news conference with Gov. Rick Scott that one is well enough for release.

Scott says three are still in intensive care. No details were released about any of the victims.

Authorities say the people were shot at random by 26-year-old Esteban Santiago in a baggage area at Fort Lauderdale-Hollywood International Airport. Santiago is in custody and expected to face federal charges in court Monday.

A devout Catholic woman who lived in Georgia was among the five people killed in the Fort Lauderdale, Florida, airport shooting.

That's according to her church, which confirmed the death of Ogla Woltering in a statement on its website Saturday, the day after the attack.

The Catholic Church of the Transfiguration said the native English woman who had long lived in the Atlanta suburb of Marietta "was so charming, calling everybody `Lovey' or `Love' in her unmistakable British accent."

A fellow parishioner says she and her husband, Ralph, were "the life of the party."

The church says,  "Her life revolved around her kids, grandchildren, great-grandchildren, and hundreds of extended family at Transfiguration."

The sister of an Iowa man says he was among the five people killed in the Fort Lauderdale, Florida, airport shooting.

Elizabeth Oehme-Miller told The Associated Press by phone Saturday that her brother, 57-year-old Michael Oehme, was killed in Friday's attack and that her brother's wife, Kari Oehme, was shot in the shoulder and is expected to recover.

Oehme-Miller says the couple was in Fort Lauderdale getting ready for a Caribbean cruise that was supposed to start Saturday. She says they were frequent travelers who loved cruises and were happy to be headed on another one.

Oehme-Miller says another family member is flying to Fort Lauderdale to help Kari Oehme return home to Council Bluffs, which is right across the state border from Omaha, Nebraska.

No official list of the victims has been released, but loved ones have started to talk about them to news outlets.

Law enforcement officials say the gunman in a deadly Florida airport shooting had a semi-automatic handgun, and they expect to release charges against him this afternoon.

At a news conference Saturday, a day after the attack, the FBI said it had interviewed the suspect's family.

Local and federal officials also said at the news conference that they believe he came to Fort Lauderdale specifically to carry out the attack, though they had not uncovered any triggers for it in their investigation. They say they still believe the shooter acted alone and that they have several critical leads.

Law enforcement says there are six people recovering from gunshot wounds after the shooting at a Florida airport, decreasing that total from the number of eight given previously.

Sheriff Scott Israel gave the new information at a news conference Saturday, one day after the shooting at the Fort Lauderdale airport.

Five people were killed in the shooting.

Officials said on Twitter the airport reopened for commercial flights at 5 a.m. Saturday, although many flights are canceled or delayed. Local media reported long lines of passengers were forming outside terminals.

Airport officials also say they are trying to match more than 20,000 bags and personal items with their owners. Authorities say it is a complex and time-consuming process.

The gunman who fatally shot five people and wounded eight others in Fort Lauderdale's airport sent panicked passengers running out of the terminal and onto the tarmac with bags in hand.

Authorities say Army veteran Esteban Santiago of Anchorage, Alaska, had complained that the government was controlling his mind drew a gun from his checked luggage on arrival and opened fire on fellow travelers.

FBI agent George Piro says authorities are looking at leads in several states and have not ruled out terrorism.

The airport was shut down, with incoming flights diverted and outgoing flights held on the ground. Airport Director Mark Gale said it will try to reopen at 5 a.m. Saturday but urged travelers to check with their individual airlines on flight status