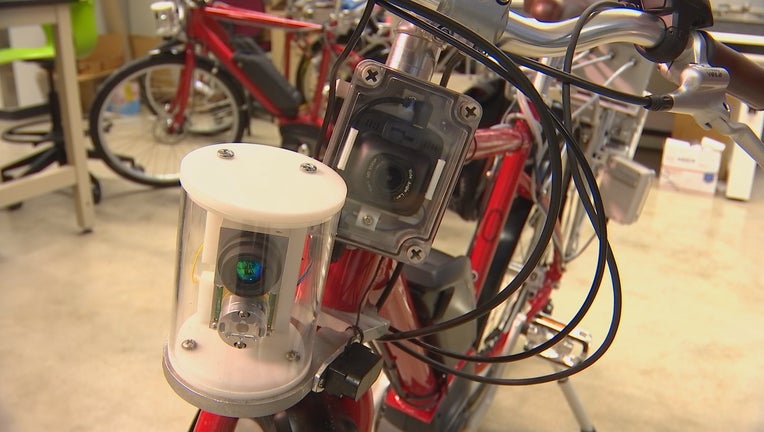 University of Minnesota Professor Rajesh Rajamani is designing a bike to increase safety on the roads. (FOX 9)

MINNEAPOLIS (FOX 9) - A University of Minnesota professor is trying to re-engineer bike safety by developing a safer bike.

“We’re trying to make a smart bicycle that protects itself,” said Professor Rajesh Rajamani from the U of M mechanical engineering department.

A University of Minnesota professor is trying to re-engineer bike safety by developing a safer bike.

The bike itself is an electric commuter bike that Professor Rajamani has equipped with sensors, microprocessors and low-density LIDAR lasers.

“And it not only scans the road, but once it detects a car, it follows the car and decides whether the car is posing a danger to the bicycle or not,” said Rajamani.

The sensors are connected to two black box video cameras, all controlled by a set of microprocessors. Out on the road, the components work together to detect a car moving into the path of the bike and sound an alarm.

Avoiding accidents is a big issue, particularly in the Twin Cities where more people ride bikes and commute than almost any other metro in the country. The number of bike accidents causing injuries across the state has steadily dropped by nearly 300 cases since 2015, but seven people died in 2018 alone.

“We need technology here make bicycling safer to alert the car driver to the presence of these bicycles,” said Rajamani.

The smart bike provides that extra set of eyes, even if they’re electronic. It’s all under development in an engineering lab where the doors are not shutting out the potential of saving lives.

One of the biggest engineering challenges is cost. The sensors on a Google self-driving car are about $80,000. Professor Rajamani is trying to put them on bikes for $500 or less.

Coming up in April, the bikes go on the road for six weeks of field testing. If everything goes well, he’s hoping the university can license the technology to a bike manufacturer.