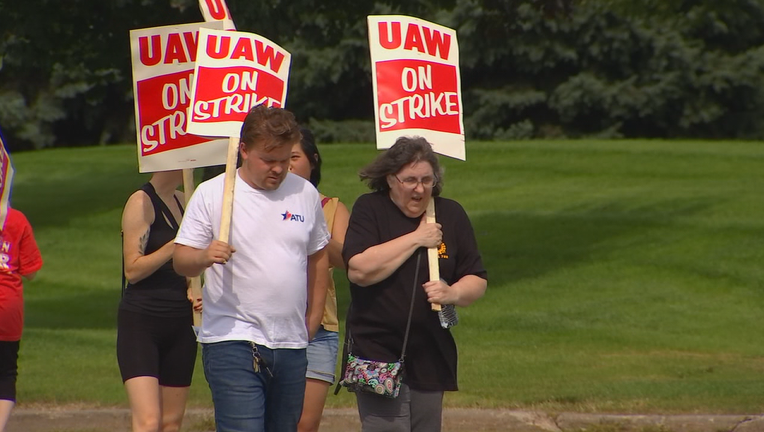 HUDSON, Wis. (FOX 9) - United Auto Workers are picketing against General Motors across the country, including a strike in Hudson, Wisconsin.

49,000 members are protesting nationwide after contract negotiations between the union and General Motors came to a halt over the weekend. The impact is felt at the GM Distribution Center in Hudson, where workers picketed Monday.

United Auto Workers are picketing against General Motors across the country, including a strike in Hudson, Wisconsin.

Members of the United Auto Workers started outside the facility at 11 p.m. Sunday night and they say they plan on picketing in front of the center 24 hours a day. They will work in shifts of about 10 at a time until a deal is finalized.

The picketers are going in circles, which is what they say the union and GM have been doing in contract negotiations for months.

“The company is making record profit, and there’s no excuse for them not to give back at this time when we’ve given back the last few contracts,” said Dan Norton, the chairperson for the Distribution Center’s 75 union members.

He said employees made sacrifices to help GM when it was going through bankruptcy.

“They’ve never given anything back to us, or very little,” Norton said. “And all we’re doing is trying to ask for some of that back.”

One thing they want back is the way temporary employees are treated.

“We want the new people our new employees to not have to be temporaries for three or four years. We want them to be hired after 90 days and get the same benefits we all got previously,” Norton added.

They also want jobs back in the United States.

“During the bankruptcy, GM was bailed out by the American public and now they’re back on their feet and they’re making record profits, and all they’re doing is shipping more and more jobs to Mexico,” Norton added.

Even though their jobs distributing auto parts across the Midwest are not at risk of going out of the country, they’re marching alongside thousands of other workers across the country in the hopes that picketing will put some of GM’s profits into their pockets.

“The employees here that work hard deserve to have good-paying jobs here in the USA,” Norton said.

General Motors did not respond to FOX 9’s request for comment. In a statement given to FOX Business, it said it negotiated in good faith and that their goal is to build a strong future for their employees and businesses.

Sunday, the company said they offered to raise pay for employees and to spend $7 billion on U.S. investment, resulting in more than 5,000 jobs.

Last time there was a strike in Hudson was more than a decade ago. That strike lasted three days. Members say this one could go longer. Only members of management will be working at the facility until a deal is reached.