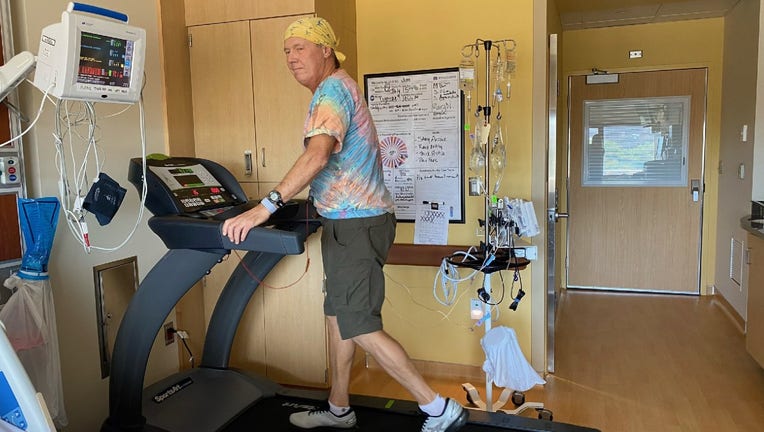 Jim Kirkham walks on his treadmill just days after receiving a bone marrow transplant to treat his leukemia.

DULUTH, Minn. (FOX 9) - Grandma's Marathon in Duluth, Minnesota returns in-person on Saturday. Among the runners is a doctor from the University of Minnesota, who considers himself not very fast but very lucky.

Dr. Jim Kirkham’s lifetime bib number is 925. This year will be his 42nd Grandma’s Marathon, but making it to this year’s event has been quite the journey. He's a cancer survivor and less than a year ago had a bone marrow transplant.

Grandma's Marathon in Duluth, Minnesota returns in-person on Saturday. Among the runners is a doctor from the University of Minnesota, who considers himself not very fast but very lucky.

In 2006, Kirkham, who works in the department of radiology at the University of Minnesota, was diagnosed with aplastic anemia – a condition in which his body stopped producing healthy blood cells.

"That year I was told maybe a marathon wasn’t a good idea, so I got a cab ride up to the beginning of the race in Duluth and got dropped off at 2 a.m. after I had laid water bottles along the route," said Kirkham.

He completed that run 24 hours before all the other runners. Years and more marathons later, Kirkham developed another disorder that was tearing up his red blood cells and then last March, he faced leukemia. After radiation and chemotherapy, he had a bone marrow transplant in July and arranged to have a treadmill in his hospital room two days later.

"I guess I never assumed I wasn’t going to do another marathon," said Kirkham. "This is a bump in the road. You come to a hill when you are running and you go up over it and you just keep going."

"If he didn’t do a bone marrow transplant, Jim’s life was going to be limited," said Dr. Jeff Miller, Kirkham’s doctor, who will be in Duluth to cheer him on. "We don’t know for how long. It’s either months or years. At the point, we made the decision he had no chance of surviving long-term."

Now Kirkham’s not only surviving, but his health is thriving, in large part thanks to his early goals of staying active, eating healthy and always thinking positive.

"He’s been an inspiration for the care team," said Miller.

Kirkham credits most of all the anonymous 23-year-old willing to be a bone marrow donor just 11 months ago.

"It’s such a life-giving thing to do for somebody," he said.