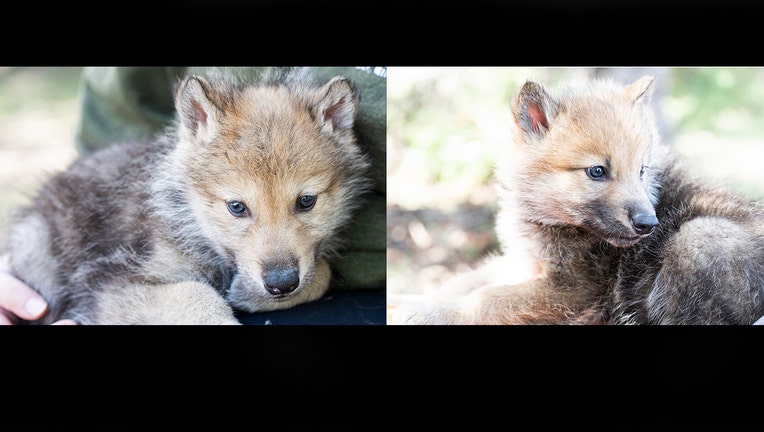 New for 2022, the International Wolf Center is adding two pups to its Exhibit Pack that will be visible to the public starting Friday, June 3.

(FOX 9) - New for 2022, the International Wolf Center is adding two pups to its Exhibit Pack that will be visible to the public starting Friday, June 3.

According to an announcement of their arrival, the Wolf Center believes in wolf education, and one method for accomplishing its mission of advancing the survival of wolf populations in the wild is through the use of ambassador wolves.

"These ambassador wolves allow us to teach thousands of people a year about the real behavior of wolves," Lori Schmidt, the Center’s wolf curator, said in a statement. "The Exhibit Pack is also a key part of the online programs we offer to schools across the world."

The Center planned to add the pups in 2020, but the COVID-19 pandemic forced it to delay those plans. Then in 2021, it was able to obtain just one pup.

Adding pups this year was important for the health of the pack, and to allow the Center's yearling wolf Rieka to experience some pup behavior she lacked as a singleton, Schmidt said.

"So often people portray wolves for their predatory behavior and don’t appreciate the intricate pack life and social organization that keeps them together as a social unit," she said in the news release. "As curator, it is my job to maintain a socially cohesive unit of wolves in the exhibit, and we recognize that to do this, new life must be added."

A pup naming contest will begin in early June, with an announcement of the names at a special virtual fundraising event on June 14. They will join three wolves in the Exhibit Pack, including Axel (6), Grayson (6) and Rieka (who turns 1 on May 23).

One way for visitors to see the pups is through an outdoor viewing area adjacent to the wolf yard. Another way to see the 2022 wolf pups is with a one-hour behind-the-scenes tour, only available for members of the International Wolf Center. Membership information can be found here.