The turbulence sparked by the death of George Floyd — a black man who died after being pinned under the knee of a white Minneapolis police officer — shook not only the streets of New York and Los Angeles, but dozens of smaller communities such as Fargo, North Dakota, and Lincoln, Nebraska.

WASHINGTON (AP) - Secret Service agents rushed President Donald Trump to a White House bunker on Friday night as hundreds of protesters gathered outside the executive mansion, some of them throwing rocks and tugging at police barricades.

RELATED: ‘We must be better’: Former President Barack Obama issues statement on death of George Floyd

The abrupt decision by the agents underscored the rattled mood inside the White House, where the chants from protesters in Lafayette Park could be heard all weekend and Secret Service agents and law enforcement officers struggled to contain the crowds.

Friday’s protests were triggered by the death of George Floyd, a black man who died after he was pinned at the neck by a white Minneapolis police officer. The demonstrations in Washington turned violent and appeared to catch officers by surprise. They sparked one of the highest alerts on the White House complex since the Sept. 11 attacks in 2001 . 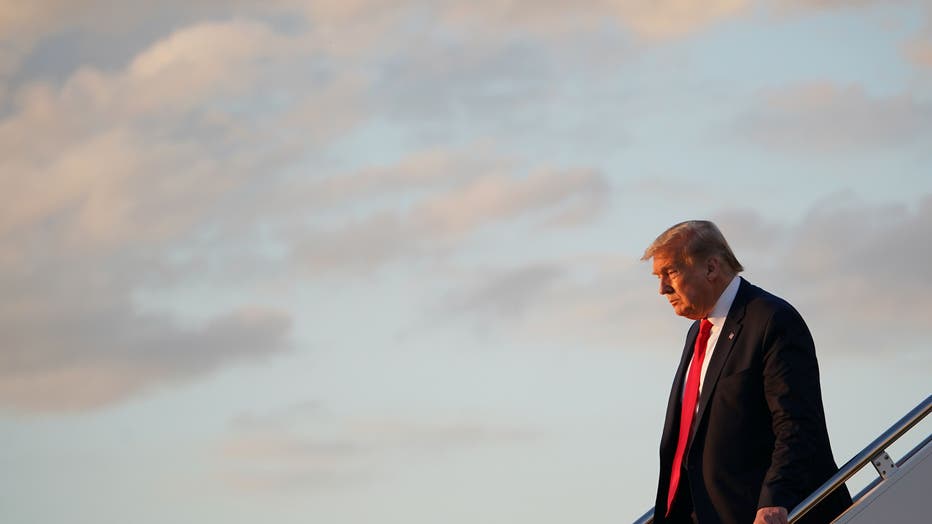 FILE - US President Donald Trump steps off Air Force One upon return to Andrews Air Force Base in Maryland on May 30, 2020. (Photo by MANDEL NGAN/AFP via Getty Images)

“The White House does not comment on security protocols and decisions,” said White House spokesman Judd Deere. The Secret Service said it does not discuss the means and methods of its protective operations. The president’s move to the bunker was first reported by The New York Times.

The president and his family have been shaken by the size and venom of the crowds, according to the Republican. It was not immediately clear if first lady Melania Trump and the couple’s 14-year-old son, Barron, joined the president in the bunker. Secret Service protocol would have called for all those under the agency’s protection to be in the underground shelter.

Trump has told advisers he worries about his safety, while both privately and publicly praising the work of the Secret Service.

Trump traveled to Florida on Saturday to view the first manned space launch from the U.S. in nearly a decade. He returned to a White House under virtual siege, with protesters — some violent — gathered just a few hundred yards away through much of the night.

Health experts fear that silent carriers of the virus could unwittingly infect others at protests where people are packed cheek to jowl.

Demonstrators returned Sunday afternoon, facing off against police at Lafayette Park into the evening.

Trump continued his effort to project strength, using a series of inflammatory tweets and delivering partisan attacks during a time of national crisis.

As cities burned night after night and images of violence dominated television coverage, Trump’s advisers discussed the prospect of an Oval Office address in an attempt to ease tensions. The notion was quickly scrapped for lack of policy proposals and the president’s own seeming disinterest in delivering a message of unity.

Trump did not appear in public on Sunday. Instead, a White House official who was not authorized to discuss the plans ahead of time said Trump was expected in the coming days to draw distinctions between the legitimate anger of peaceful protesters and the unacceptable actions of violent agitators.

On Sunday, Trump retweeted a message from a conservative commentator encouraging authorities to respond with greater force.

“This isn’t going to stop until the good guys are willing to use overwhelming force against the bad guys,” Buck Sexton wrote in a message amplified by the president.

In recent days security at the White House has been reinforced by the National Guard and additional personnel from the Secret Service and the U.S. Park Police.

On Sunday, the Justice Department deployed members of the U.S. Marshals Service and agents from the Drug Enforcement Administration to supplement National Guard troops outside the White House, according to a senior Justice Department official. The official could not discuss the matter publicly and spoke on condition of anonymity.