UNITED NATIONS - President Trump said in a tweet that he will release on Wednesday a transcript of his July phone call to Ukrainian President Volodymyr Zelensky, in which they reportedly discussed an investigation involving Joe Biden.

The dramatic 'flip-the-script' moment could blunt Democrats' newly energized push to begin a formal impeachment inquiry, based on a whistleblower's allegation that the president pressed the new Ukrainian president during the phone call to investigate Biden and his son Hunter. 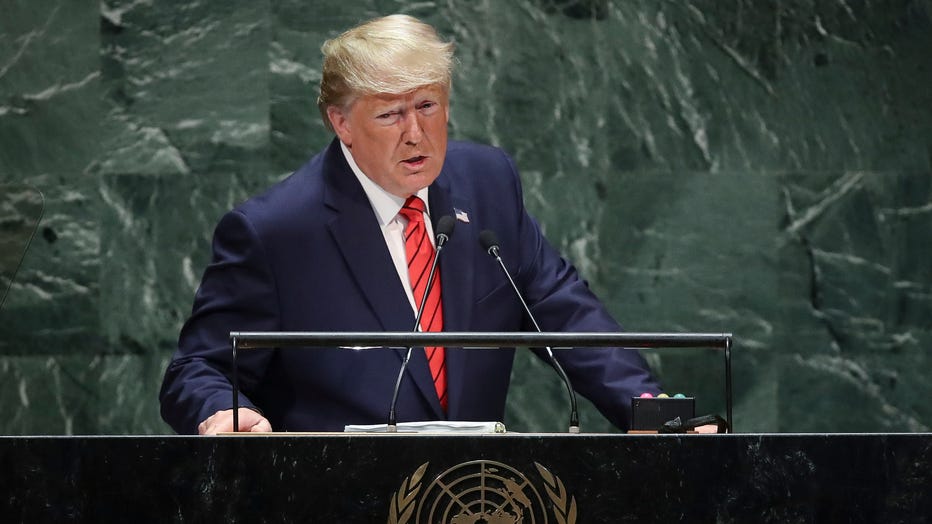 "I am currently at the United Nations representing our Country, but have authorized the release tomorrow of the complete, fully declassified and unredacted transcript of my phone conversation with President Zelensky of Ukraine," Trump wrote.

"You will see it was a very friendly and totally appropriate call. No pressure and, unlike Joe Biden and his son, NO quid pro quo! This is nothing more than a continuation of the Greatest and most Destructive Witch Hunt of all time!"

But Democrats were sure to continue their push for the whistleblower's full complaint and testimony, which could provide additional details. House Intelligence Committee Chairman Adam Schiff, D-Calif., said Tuesday that testimony from the whistleblower might be imminent.

"We have been informed by the whistleblower’s counsel that their client would like to speak to our committee and has requested guidance from the Acting DNI [Director of National Intelligence] as to how to do so," Schiff said in a a tweet. "We‘re in touch with counsel and look forward to the whistleblower’s testimony as soon as this week."

Joe Biden has acknowledged that, when he was vice president, he successfully pressured Ukraine to fire its top prosecutor, Viktor Shokin, while Shokin was investigating the natural gas firm Burisma Holdings — where Hunter Biden was on the board.

Top Trump surrogates, including his personal attorney Rudy Giuliani, have long said that Ukraine should investigate that matter fully.

In remarks to reporters at the United Nations on Monday, Trump denied linking the aid money to Ukraine's investigative actions. “No, I didn’t — I didn’t do it,” Trump said. But he also repeatedly called the Bidens' actions in Ukraine a "disgrace," and added: “It’s very important to talk about corruption. ... Why would you give money to a country that you think is corrupt?”

Still, there were other indications that releasing the transcript would not fully satisfy the growing chorus of Democrats calling for an impeachment inquiry. In a statement on Sunday, House Speaker Nancy Pelosi, D-Calif., strongly suggested that impeachment might be on the table if the whistleblower's full complaint was not provided to Congress.

"If the Administration persists in blocking this whistleblower from disclosing to Congress a serious possible breach of constitutional duties by the President, they will be entering a grave new chapter of lawlessness which will take us into a whole new stage of investigation," Pelosi said.

"Nixon released his own transcripts of the Oval Office tapes — which turned out to be wildly misleading," said historian Kevin Cruse.

Meanwhile, a slew of key swing-district Democrats late Monday threw their support en masse behind opening a formal impeachment inquiry, as The New York Times, The Washington Post and The Wall Street Journal reported in the evening that the president personally ordered acting White House chief of staff Mick Mulvaney to freeze nearly $400 million in military aid to Ukraine just days before his phone call with the Ukrainian president.

House Democrats were set to meet Thursday evening to discuss next steps. A senior House Democratic leadership aide told Fox News that the Ukraine matter would be front-and-center.