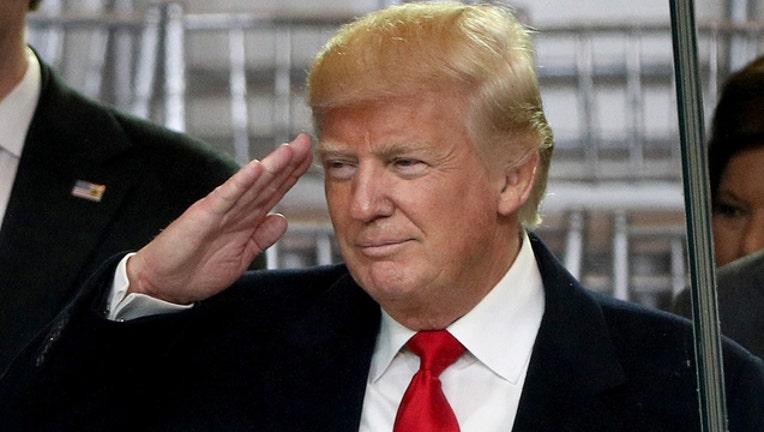 President Donald Trump salutes as he watches the Inaugural Parade from the main reviewing stand in front of the White House on January 20, 2017 in Washington, DC. (Photo by Patrick Smith/Getty Images)

WASHINGTON (AP) — It looks like President Donald Trump is getting the military parade he wants in Washington — though he may get no tanks for the effort.

A Pentagon planning memo issued Thursday and released Friday says the parade being planned for Nov. 11, Veterans Day, will "include wheeled vehicles only, no tanks — consideration must be given to minimize damage to local infrastructure." Big, heavy tanks could tear up District of Columbia streets.

But the event will "include a heavy air component at the end of the parade," meaning lots of airplane flyovers. Older aircraft will be included as available.

The memo from the office of Defense Secretary Jim Mattis offers initial planning guidance to the chairman of the Joint Chiefs of Staff, whose staff will plan the parade along a route from the White House to the Capitol, and integrate it with the city's annual veterans' parade. Northern Command, which oversees U.S. troops in North America, will execute the parade.

Trump decided he wanted a military parade in Washington after he attended France's Bastille Day celebration in the center of Paris last July. As the invited guest of French President Emmanuel Macron, Trump watched enthusiastically from a reviewing stand as the French military showcased its tanks and fighter jets, including many U.S.-made planes, along the famed Champs-Elysees.

Trump praised the French display months later when he and Macron met in New York, saying, "We're going to have to try and top it."

But outdoing the French may be difficult without any tanks.

Trump thinks the parade, which some lawmakers in both political parties have criticized, would boost the spirit of America.

"We have a great country and we should be celebrating our country," he told Fox News Channel in a recent interview.

The Pentagon memo did not include a cost estimate for the parade. The White House budget director recently told Congress the cost to taxpayers could be between $10 million and $30 million.

The parade will focus on the contributions of American veterans throughout the history of the U.S. military, starting with the Revolutionary War, and highlight the evolution of women veterans from World War II to the present, according to the memo.

Trump should be surrounded in the reviewing area at the Capitol by veterans and Medal of Honor recipients, the memo said.