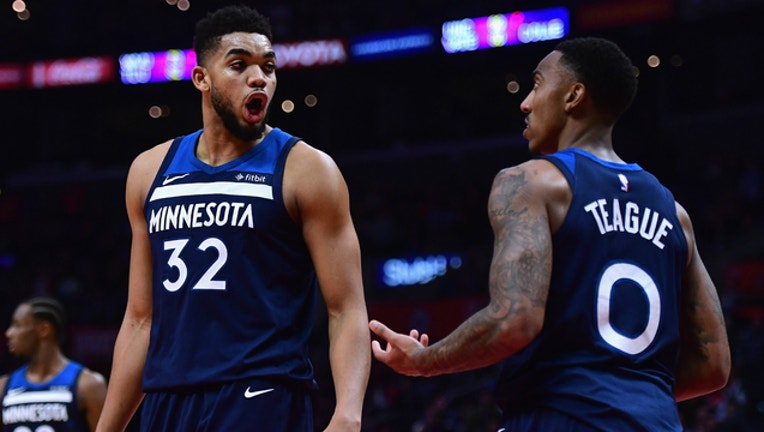 MINNEAPOLIS (AP) - Karl-Anthony Towns slammed his way to 24 points and grabbed 18 rebounds for the Minnesota Timberwolves, who toughed out a 113-94 victory over the Memphis Grizzlies on Monday night to move one step closer to a long-sought spot in the playoffs.

Jeff Teague added 24 points and Jimmy Butler scored 15 points for the Timberwolves, who trailed by 10 points early before taking over against a depleted Grizzlies team that beat them 101-93 exactly two weeks ago in one of their worst losses of the season. Towns had five dunks to help ignite the crowd.

Ben McLemore had 18 points for the Grizzlies, who moved one loss closer to a prime lottery pick.

The Wolves entered the evening with more than just payback on the agenda. They had the opportunity to secure their first appearance in the playoffs since Kevin Garnett was patrolling the post with Latrell Sprewell as a wing man and Sam Cassell running the offense in 2004.

The checklist for the clinch included a win over the Grizzlies and victories by San Antonio and Portland, with the Spurs hosting the Sacramento Kings and the Blazers visiting the Denver Nuggets in games that began later.

Teague missed six of his first eight shots, but he helped the Wolves pull away with a four-point play in the early portion of the third quarter. His lob found Wiggins for a soaring dunk about three minutes later. Dieng sank his second 3-pointer of the night soon after for a 75-63 lead. Butler gave the Wolves a 98-83 lead midway through the fourth quarter with a hustle to finish a fast break with a layup.

The Grizzlies, whose streak of seven straight postseason appearances was snapped long ago, were sapped by the summer departures by expensive veterans Zach Randolph, Tony Allen and Vince Carter and never recovered.

Point guard Mike Conley hurt his heel and hasn't played since mid-November, and coach David Fizdale was fired later that month. Tyreke Evans has barely played down the stretch, and he missed his ninth straight game for an unspecified personal matter. Chandler Parsons, the top newcomer, has missed 45 games to various ailments. Even Marc Gasol, who bested Towns for 20 points and 10 rebounds in the last matchup, sat out to rest. The starting lineup for this game had only one holdover, Dillon Brooks, from the March 26 meeting.

The Grizzlies, who fell to 6-34 on the road, would match the franchise's worst record (22-60) since the move to Memphis if they lose their final game.

The Wolves brought energy and crisp ball movement, but they clearly carried some pressure with them during an ugly start filled with turnovers and misfires. They made only four of their first 16 shots from the field, with Teague and Wiggins struggling in particular. Boos circulated in the arena as Omari Johnson's jumper put the Grizzles in front 24-14, before the Wolves began to get some of their good looks to go down.

Butler missed a short bank shot as he was fouled and bricked the first free throw, too, causing him to growl in disgust as he reached the bench early in the second quarter. The Wolves, though, used a 20-4 run to lighten the mood a little in the arena. Derrick Rose (13 points), Dieng (11 points) and Tyus Jones (eight points) combined to produce a solid output from the second unit.