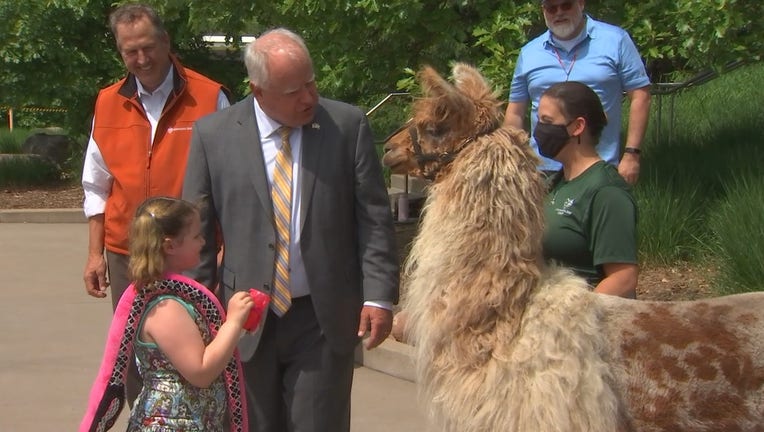 Governor Tim Walz holds an event at the Minnesota Zoo, which would be affected by a government shutdown in July if a budget deal is not reached.

Legislative leaders and Gov. Tim Walz have all said this week that they're unwilling to shut down the government over key budget priorities. Nevertheless, they have blown through multiple deadlines to get a deal.

Top Minnesota politicians are expressing confidence they'll avert a July 1 government shutdown, though they have produced little proof that they're making progress in budget negotiations.

"I want to put a rest to this," Walz told reporters during an event at the Minnesota Zoo. "The last thing anybody should be talking about or threatening is a government shutdown. We're already way past the time this should have been done."

Thursday afternoon, the House and Senate posted budget-financing spreadsheets in three of the least controversial areas. The rest of the budget areas -- which include police accountability measures and a phasing-out of Minnesota's eviction moratorium -- are not done.

Senate Majority Leader Paul Gazelka, who along with Walz and House Speaker Melissa Hortman negotiated a framework for the budget last month, said Thursday that he opposed a government shutdown.

"The Senate has no issues that we would demand a shutdown to get," Gazelka, R-East Gull Lake, told reporters. "I think it would be detrimental to Minnesota to let the whole state shut down."

In a shutdown, agencies would have to shutter most operations. Walz said the state Department of Transportation would start winding down road construction projects sooner, by mid-June, if there isn't a budget deal in place. It will cost millions of dollars to stop and restart the projects, the governor said.

Tuesday, Minnesota mailed layoff notices to more than 37,000 state workers, warning of a July 1 government shutdown if lawmakers don't finish the budget on time. State workers do not get paid during a shutdown, though they are eligible for unemployment benefits.

Hortman said this week that she too was confident in avoiding a shutdown.

"It is nerve wracking for all of us to be beyond the constitutional deadline, but really we have until June 30," said Hortman, DFL-Brooklyn Park.

"It would be very complicated here at the zoo, like every place," Frawley said. "We would just go to essential services which, having just been through a pandemic, are pretty ironed out."