FBI agents seized classified records from former President Trump’s home at Mar-a-Lago during its unprecedented raid on Monday, including some marked as top secret.

WASHINGTON - The FBI search of former President Donald Trump’s Mar-a-Lago estate sent reverberations across the country, even before court papers were unsealed Friday showing agents recovered documents labeled "top secret" as they investigated potential violations of three laws, including one that governs defense information under the Espionage Act.

Trump has said the documents seized by agents were "all declassified," and argued that he would have turned them over to the Justice Department if asked. It was unclear, however, whether the documents had been declassified or whether he had the power to do so. Trump also had kept possession of the documents despite multiple requests to turn them over in accordance with federal law. 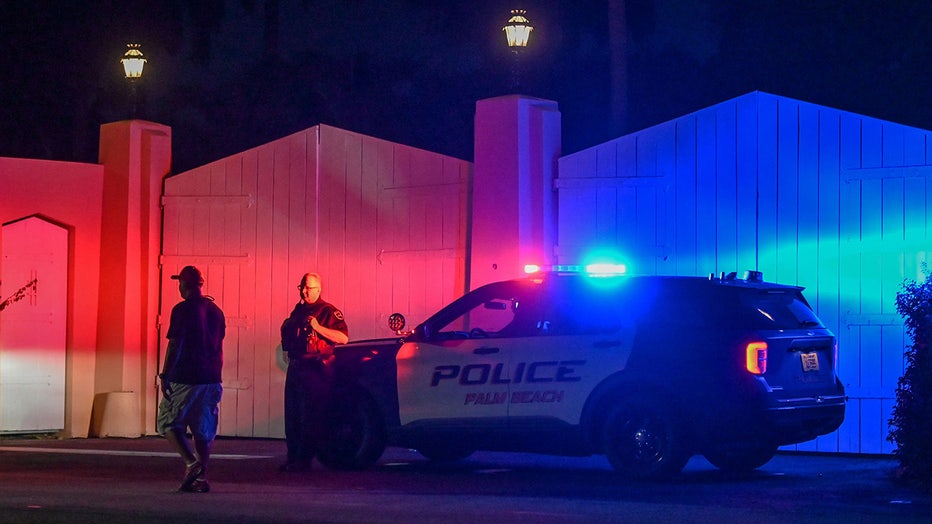 A police car is seen outside former US President Donald Trump's residence in Mar-A-Lago, Palm Beach, Florida on August 8, 2022. (Photo by GIORGIO VIERA/AFP via Getty Images)

Here's a look at how the monthslong investigation unfolded and the rapid drumbeat of what's happened since:

Mid-January 2022: Fifteen boxes of presidential records are retrieved from Mar-a-Lago in a transfer arranged by the National Archives and Records Administration. The transfer came after a Trump representative told the agency in December 2021 there were records in Florida nearly a year after he left office. The agency says that under federal law, all records have to be preserved, a process that is "critical to our democracy."

Trump calls the discussions "collaborative and respectful" and says it was a "great honor" to work with the National Archives. His representatives told the agency they would keep looking for more presidential records.

Jan. 31, 2022: The agency says in a statement that some paper records from Trump's time in office had been torn up by Trump. During his tenure in office, White House records management officials had recovered and taped together some of the torn-up presidential records and turned them over to the archives as he left office, along with other torn-up records that had not been reconstructed.

Feb. 18, 2022: Classified information was found in the 15 boxes of White House records that had been stored at Mar-a-Lago, the National Archives and Records Administration says. The revelation came in a letter responding to a congressional oversight committee. It also confirmed that the matter had been sent to the Justice Department.

Federal law bars removing classified documents to unauthorized locations, though Trump could argue that as president he was the ultimate authority on whether documents were classified.

Trump, for his part, says the National Archives were given the requested presidential records "in an ordinary and routine process."

Feb. 25: The House Committee on Oversight and Reform seeks additional documents from the National Archives as part of its investigation into Trump’s handling of White House records.

The committee chaired by Democratic Rep. Carolyn Maloney of New York laid out a series of documents it needed to determine if the former president violated federal records laws when he took the boxes to Florida.

Spring 2022: Investigators from the Justice Department and FBI visit Mar-a-Lago to get more information about classified materials taken to Florida, according to a source familiar with the matter. Federal officials also served a subpoena for some documents believed to be at the estate.

Aug. 5: U.S. Magistrate Judge Bruce Reinhart in South Florida approves an application for a search warrant, finding the FBI had probable cause to search Mar-a-Lago. The search warrant is sealed, as is typical for any pending investigation. Attorney General Merrick Garland later says he personally approved the decision to seek the search warrant.

Aug 8: The FBI executes the search at Mar-a-Lago in an unprecedented escalation of law enforcement scrutiny of the former president. Trump wasn't at the estate at the time, which was shuttered for the season, but disclosed the search in a fiery public statement. He asserted agents had opened up a safe at his home in what he called an "unannounced raid" that he likened to "prosecutorial misconduct."

Trump and his allies cast the search as a weaponization of the criminal justice system aimed at keeping him from potentially winning another term if he formally decides to run for president in 2024. President Joe Biden's White House said it had no prior knowledge of the search, and the current FBI director was originally appointed by Trump.

Aug. 10: The director of the FBI speaks out against a proliferation of threats and calls to arms in corners of the internet favored by right-wing extremists in the wake of the search. Speaking during a previously scheduled visit to the FBI field office in in Omaha, Nebraska, Christopher Wray says the rhetoric targeting federal agents and the Justice Department is "deplorable and dangerous" and "violence against law enforcement is not the answer, no matter who you’re upset with."

Aug. 11: After days of public silence, Garland holds a brief news conference where he drops a major announcement: He will ask the court to unseal the search warrant, a striking and unusual step for a pending investigation. Garland said the public was entitled to know what prompted the extraordinary search at a former president's home.

Trump responds with a statement calling for "immediate" release of the warrant. His lawyers do not immediately make public records they have that the government sought to unseal.

Meanwhile, in Ohio, an armed man wearing body armor tries to breach a security screening area at an FBI field office. He fled and was later killed following a standoff with police. A law enforcement official briefed on the matter identified him as Ricky Shiffer and said he is believed to have been in Washington just before the attack on the Capitol and may have been there on Jan. 6.

Aug. 12: Judge Reinhart unseals the warrant that authorized the FBI to search Mar-a-Lago, along with court papers showing that agents recovered documents labeled "top secret" among 11 sets of classified records. The court papers did not provide specific details about the documents or what information they might contain.

The warrant details that federal agents were investigating potential violations of three federal laws, including one that governs gathering, transmitting or losing defense information under the Espionage Act.