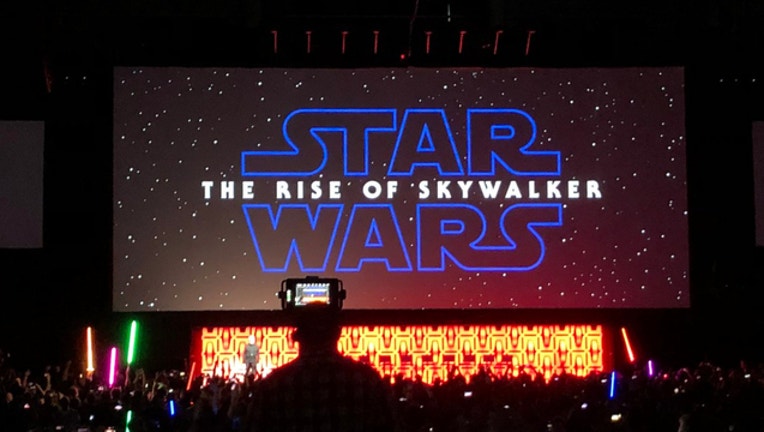 CHICAGO (AP) - "No one is ever really gone," says the voice of Luke Skywalker in the first teaser trailer for "Star Wars: Episode IX," which audiences finally learned will be called "Star Wars: The Rise of Skywalker" Friday at a fan event in Chicago.

The closely guarded film from director J.J. Abrams will put an end to the Skywalker saga that began over 40 years ago, but even as characters and actors have passed on, the footage shown at Star Wars Celebration suggests that as with all "Star Wars" films, death is just a technicality a long time ago in a galaxy far, far away.

Mark Hamill's Skywalker may have died at the end of the most recent installment but his voice dominates the teaser trailer, telling someone, possibly Daisy Ridley's Rey, that, "this is your fight now." And audiences got a tantalizing tease from another figure from the past: Emperor Palpatine from the original and prequel trilogies, whose ominous laugh closes out the promotional spot.

Carrie Fisher's Leia Organa is back as well, despite the actress's untimely passing in Dec. 2016, thanks to unused footage from "The Force Awakens" which Abrams was able to craft into its own narrative for this new film.

"You can't just recast and you can't just have her disappear," Abrams said. "The idea of having a CG character wasn't even an option."

He's currently in the process of editing and adding visual effects to the film which will hit theaters on Dec. 20 and said that despite Fisher's death, "We're working with her every day."

"Princess Leia lives in this film in way that is mind-blowing to me," Abrams said.

"How did I find Lando again?" Williams said. "Lando never left me."

"Star Wars" superfan Stephen Colbert moderated the panel, doing his best to get the tight-lipped cast and creators to reveal anything about the film. Although no one cracked under pressure, Abrams did reveal some previously known details, like the fact that "The Rise of Skywalker" will pick up "some time" after the events of "The Last Jedi."

"This is an adventure that the group goes on together," he teased, although he wouldn't reveal whether or not that meant the group on stage or some other combination.

"This movie is about this new generation and what they've inherited, the light and the dark," Abrams added. "As they face this greatest evil, are they prepared?"

Besides Hamill, another person who wasn't in attendance was Kylo Ren actor Adam Driver. Ren is the son of Han Solo and Leia, making him and his mother the only known Skywalkers left.

When prodded about what will happen with the complex relationship between Kylo and Rey, Ridley demurred, "I guess the Kylo and Rey thing, we'll have to see."

She added: "I think I can confirm there are no more semi-naked Kylos." That's a reference to the scenes of a shirtless Driver in "The Last Jedi" that surprised fans.

Although fans are salivating for any morsel of information, the panelists stayed as vague as possible, and kept things light-hearted debating questions like "who's a better pilot: Poe or Han" and even taking a break so that the audience could sing an unprompted Happy Birthday to Ridley, who turned 27 on Wednesday.

Kennedy, quoting George Lucas, said however that "Episode IX" is indeed the third act of a three-act structure.

But, predictably, there are still more questions than answers when it comes to "The Rise of Skywalker," especially what will come after.

The Lucasfilm and Disney collaboration has proved to be a lucrative one since Disney purchased the company in 2012 for $4 billion. Disney's first two "Star Wars" films, "The Force Awakens" and "The Last Jedi" and its spinoffs, "Rogue One" and "Solo," have already grossed more than $4.8 billion at the worldwide box office.

As of now, there is a future for "Star Wars" on the big screen, but details are sparse and dates are non-existent. "The Last Jedi" director Rian Johnson is working on a new "Star Wars" trilogy and "Game of Thrones" showrunners D.B. Weiss and David Benioff are also at work on a "movie series."

Lucasfilm is expanding its small screen universe too beyond "The Clone Wars" with the Jon Favreau-directed series "The Mandalorian," which will be available on Disney's streaming service, DisneyPlus, when it launches on Nov. 12, and there will be a "Rogue One" spinoff series focused on Diego Luna's character Cassian Andor. With the company's acquisition of 21st Century Fox's entertainment properties, too, Lucas' original trilogy and prequels will also be available on the service.

But who's got time to think about the future when there are over two minutes of brand new footage from "The Rise of Skywalker" to dissect?