The head of the World Health Organization said the COVID-19 outbreak is accelerating, but insisted that

GENEVA (AP) - The World Health Organization tweeted on Monday about the urgent need for more aggressive tactics to fight the spread of the novel coronavirus.

The head of the World Health Organization said the COVID-19 outbreak is accelerating, but insisted that "we can change the trajectory of this pandemic." 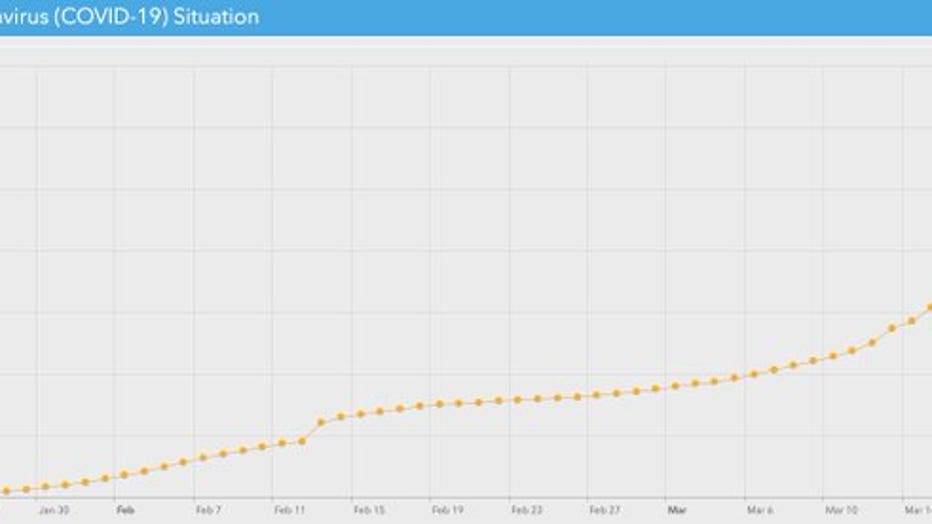 WHO announced the pandemic is "accelerating," as cases reach over 300,000 worldwide.

In a series of tweets by WHO Director-General Tedros Adhanom Ghebreyesus, he noted that COVID-19 has now been reported in nearly every country in the world.

Tedros said the world can’t win against the virus by defending. “You have to attack as well,” Tedros said.

“Asking people to #StayHome & other physical distancing measures are important to slow down the spread of the #coronavirus & buy time, but they're defensive measures,“ Tedros said.

"To win, we need to attack the #coronavirus with aggressive and targeted tactics – testing every suspected #COVID19 case, isolating and caring for every confirmed case, and tracing and quarantining every close contact," added Tedros.

Tedros said he would speak with heads of state and governments from the G20 countries, saying he would ask them to help increase production, avoid export bans and ensure fair distribution of "lifesaving tools" that are facing a growing shortage.

He noted measures put in place to slow the spread of the virus may be exacerbating shortages of essential protective gear and the materials to make them.

RELATED: Coronavirus: Symptoms, testing and how to prepare amid growing COVID-19 outbreak

With masks, ventilators and political goodwill in desperately short supply, more than one-fifth of the world’s population was ordered or urged to stay in their homes Monday at the start of what could be a pivotal week in the battle to contain the coronavirus in the U.S. and Europe.

Partisan divisions stalled efforts to pass a colossal aid package in Congress, and stocks fell on Wall Street even after the Federal Reserve said it will lend to small and large businesses and local governments to help them cope.

The scramble to marshal both public health and political resources intensified in New York, where a statewide lockdown took effect amid worries the city of 8.4 million is becoming one of the world's biggest hotspots. Nearly 10,000 people have tested positive in the city, and almost 100 have died.

The governor announced plans to convert a huge New York City convention center into a hospital with 1,000 beds. Meanwhile, the mayor warned that the city's hospitals are just 10 days away from shortages in basic supplies needed to protect health care workers and patients alike.

In Italy, the hardest-hit country of all, declines in both new cases and deaths for a second consecutive day provided a faint glimmer of hope, though it is too soon to say whether the crisis is leveling off.

RELATED: Social distancing: What to do and what not to do to slow the spread of COVID-19

Italian officials said Monday that the virus had claimed just over 600 more lives, down from 793 two days earlier. All told, the outbreak has killed more than 6,000 Italians, the highest death toll of any country, and pushed the health system to the breaking point there and in Spain.

The risk to doctors, nurses and others on the front lines has become plain: Italy has seen at least 18 doctors with coronavirus die. Spain reported that more than 3,900 health care workers have become infected, accounting for roughly 12% of the country's total cases.

“There's a wild race to get surgical masks,” François Blanchecott, a biologist on the front lines of testing, told France Inter radio. “We're asking mayors' offices, industries, any enterprises that might have a store of masks.”

The way U.S. officials respond to the severe pressure on hospitals — and people's willingness to keep their distance from others — will prove critical in coming days, public health experts said.

“Actions taken right now will have a huge impact on the course of this epidemic in the U.S.,” said Josh Michaud, associate director of global health policy with the Kaiser Family Foundation in Washington. “It’s an important moment."

The crisis continued to ease in China. The city of Wuhan, where the outbreak first emerged late last year, said it is allowing residents limited movement as its lockdown is gradually relaxed. China is now sending planeloads of protective gear as well as doctors to Europe.

“The U.S. is completely wasting the precious time that China has won for the world,” said Geng Shuang, the Chinese Foreign Ministry spokesman.

Dr. Anthony Fauci, the U.S. government's top infectious-disease expert, promised that medical supplies are about to start pouring in and will be “clearly directed to those hot spots that need it most.”

Meanwhile, on Capitol Hill, the Senate voted against advancing the nearly $2 trillion plan that would prop up businesses and send checks to American households. Democrats argued it was tilted toward corporations rather than workers and health care providers. Another vote was expected Monday.

President Donald Trump suggested that the remedies to fight the epidemic might be more harmful than the outbreak itself and vowed to reassess government restrictions after the U.S. shutdown reaches the 15-day mark.

“WE CANNOT LET THE CURE BE WORSE THAN THE PROBLEM ITSELF,” he tweeted.

Democrat presidential candidate Joe Biden criticized Trump for not using the full force of federal authority to combat the virus.

Worldwide, more than 350,000 people have been infected and 15,000 have died from the virus. As cases in China ebbed, the dangers to Europe and the U.S. have grown exponentially, although Germany on Monday cautiously reported some flattening of its infection curve. More than 1.5 billion around the world have been told to stay in their homes.

After just a few weeks, the U.S. has more than 35,000 cases and more than 400 deaths. Indiana, Michigan and West Virginia joined states including California, Illinois and New York in asking or ordering their residents to stay home and keep businesses closed — directives that now cover more than one-third of the U.S. population.

Industries big and small continued to shut down. Boeing announced it is suspending production in the Seattle area, where it has two mammoth aircraft plants employing about 42,000 people.

U.N. Secretary-General Antonio Guterres called for an immediate cease-fire in conflicts around the world to tackle the pandemic.

“It is time to put armed conflict on lock down and focus together on the true fight of our lives,” he said.

Former Hollywood studio boss Harvey Weinstein tested positive at the prison in New York where he is serving a 23-year sentence for rape and sexual assault, the head of the guards union said. German Chancellor Angela Merkel tested negative after putting herself in quarantine, according to a spokesman. Minnesota Sen. Amy Klobuchar, the former presidential candidate, disclosed that her husband has been hospitalized with the virus.

For most people, the new coronavirus causes only mild or moderate symptoms, such as fever or coughing. But for some older adults and people with existing health problems, it can cause more severe illness, including pneumonia. Over 100,000 people have recovered, mostly in China.

Authorities kept up their push to get people to stay home, but some were clearly not listening.

In New York, Gov. Andrew Cuomo likewise fumed over gatherings of young people in violation of his order that everyone stay 6 feet apart, saying: "It’s reckless and it's violative of your civic spirit and duty as a citizen, as far as I’m concerned.”

In a city where many people live in buildings with small elevators, a 21-story high-rise in the Chelsea neighborhood posted a notice in the lobby warning that there should be just one person per elevator, and those going to the laundry room shouldn't use a washing machine next to another one in use.

“People are really only going to get food and going back. That’s what we need,” said Matt Comet, making a brief dash into the nearly empty streets of his Manhattan neighborhood to pick up a carryout meal.

“I’m OK to have a book and watch TV for a bit, but if it continues for another month, another two months, it’ll be pretty crazy.”

India took the extraordinary step of shutting down the nation's rail system, which has long been the lifeblood of the country of 1.3 billion people.

Japanese Prime Minister Shinzo Abe acknowledged that postponing this year's Summer Olympics could be unavoidable. The International Olympic Committee said it will examine the situation over the next few weeks.