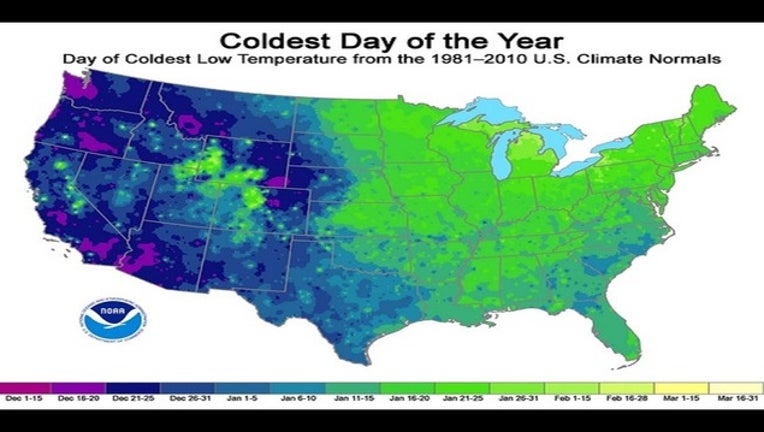 KMSP - It’s the middle of January and the brutal cold is here.  We have entered the time of winter where it’s just not much fun to have to go outside.  While it’s taken a little longer this year to have consistent frigid temperatures, the brutal cold is right on time.  We are now getting into the third week of January and that is typically when Minnesota sees its coldest numbers.  While subzero temperatures are common from mid-December through mid-February, the numbers seen during the second half of January are usually the coldest.  Just analyze the map above.  It shows the time of year when the coldest temperature usually occurs across the country.  For much of the west, it’s usually December that’s the coldest because the usually “wet” winter pattern hasn’t set up yet, allowing for clearer skies and for clear cold nights.  For the rest of the country though, it’s the January or early February arctic outbreaks that push temps to their lowest.  For Minnesota, the typical coldest temperature of the year occurs from January 16 through the 25th.  And quite likely, this year will fit into that pattern as temperatures over the weekend drop to the teens and 20’s below zero.  It would take a seriously arctic front to be able to reproduce these numbers once we get to February.