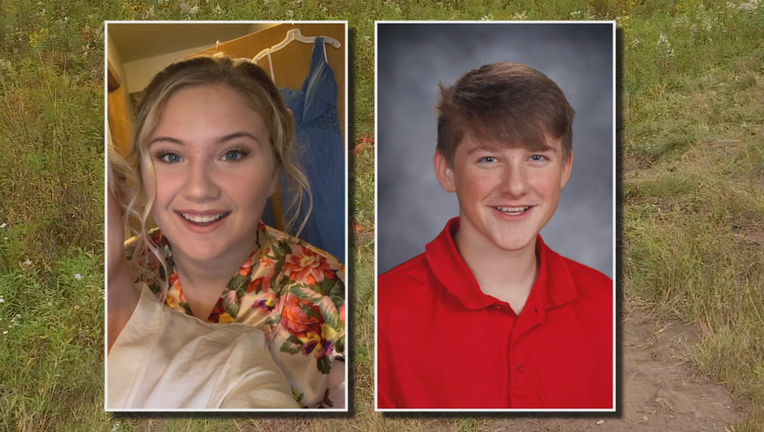 A community is mourning the loss of two teens who were killed in a crash Monday afternoon outside Clayton, Wisconsin. (FOX 9 Minneapolis-St. Paul)

CLAYTON, Wis. (FOX 9) - The community in Clayton, Wisconsin is mourning the loss of two teen students killed in a car crash Monday afternoon.

Clayton Schools Administrator Edward Cerney struggled to find the words to describe the hurt and pain in his small town community.

A community is grieving after 2 teens were killed in a crash Monday outside Clayton, Wisconsin.

“It was a shock. As most school districts, we kinda have a plan, we have a procedure that if in case some major crisis happens, we want to follow that the best we can… and you hope that you never have to use it,” Cerney said.

On Monday, a scheduled day off in the district, two well-liked student-athletes and leaders were killed in a crash just south of town on Highway 63. Both were just 16 years old.

Authorities report Michael “MJ” Magnuson was driving with classmate Grace Schradle in a 2017 Toyota Camry when they came through the high speed intersection at 60th Avenue - reportedly without coming to a full stop - and slammed into a northbound semi. The car ended up on its roof in the ditch, and both teens were killed.

Both students were very active in school and community activities. Purple and gold “Clayton-Strong” could be found all around town Tuesday, where Schradle was remembered as a three-sport athlete who looked after all of her little cousins in the school and was always full of smiles, laughter and love.

Magnuson, a member of the National Honor Society, played football and basketball and served the junior class as vice president and treasurer.

“Our message to students is together we can be strong and support each other, and that time with us was a fantastic time and we need to enjoy and think about those great moments in spite of the tragedy now,” Cerney said.