Minnesota public safety officials say they believe the "swatting" calls at Minnesota schools on Wednesday came from the same person. At least 15 schools in Minnesota were targeted with calls reporting fake school shootings, resulting in a large law enforcement response.

MINNEAPOLIS (FOX 9) - The swatting calls at more than a dozen Minnesota schools on Wednesday appeared to come from the same person, according to authorities on Thursday.

There were at least 14 schools in Minnesota targeted with fake active shooting reports, and there could be more, the Minnesota Bureau of Criminal Apprehension said on Wednesday. This came after a rash of swatting calls across the country this week, with the national incidents giving law enforcement in Minnesota a heads-up that it could happen here.

The swatting incidents sent schools into lockdown and elicited a law enforcement response. School officials said while the reports are fake, to the students and staff, it's very real and can be traumatizing.

During a news conference on Thursday, Minnesota Public Safety Commissioner John Harrington said the state is investigating the swatting incidents. All the Minnesota incidents came from a single IP address, so investigators think they're looking for one person. 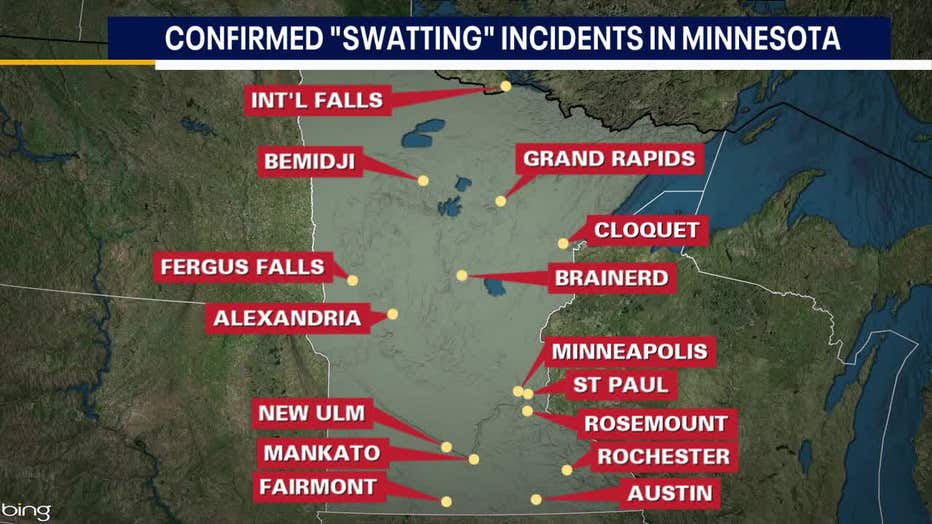 There have been at least 14 confirmed swatting incidents at Minnesota schools on Wednesday. (FOX 9)

There have been at least 14 confirmed swatting incidents. Some of them include:

Update: It was initially reported there were 15 swatting calls Wednesday, but the BCA clarified Thursday there were only 14 calls placed. An incident at Rosemount happened several days earlier but was reported to the BCA the same day as the other calls.

Gov. Tim Walz and Minnesota public safety officials discuss response to crime in Minnesota during a news conference on Sept. 22, 2022.