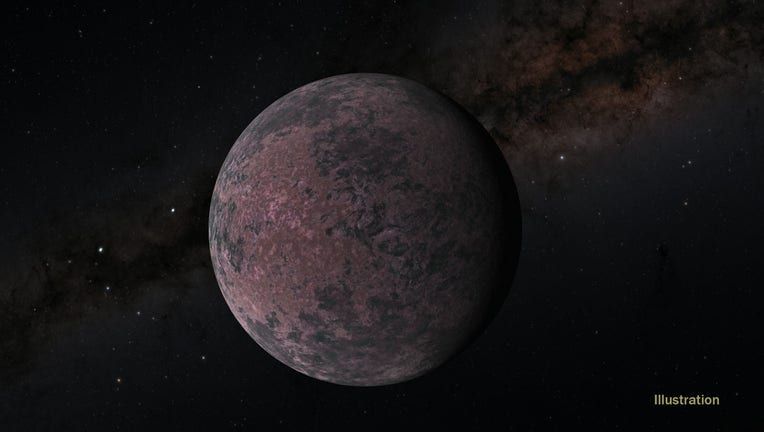 Illustration of the terrestrial super-Earth GJ 1252 b, which lies approximately 65 light-years from Earth. Credit: NASA/JPL-Caltech

The search for life on other planets could have been "dramatically narrowed," thanks to new research about an M dwarf — the most common type of star in the universe.

An Earth-like planet orbiting an M dwarf star appears to have no atmosphere, according to a new study, which was published last month in The Astrophysical Journal Letters.

Because M dwarfs are found all over the universe, the new discovery means many planets orbiting this kind of star may also lack atmospheres — and therefore, are likely uninhabitable, researchers said in a University of California, Riverside post about the study.

The team’s finding is important in the search for "Goldilocks planets," or exoplanets with conditions that are "just right" for life, since the task of scouring the infinite universe is often through a process of elimination.

RELATED: One star is eating the other: Scientists discover ‘cataclysmic’ celestial event

GJ 1252b: a Super Earth with no atmosphere, study finds

The research team focused on the exoplanet GJ 1252b, which was first discovered in 2020. This planet orbits its star twice during the course of a single day on Earth and is slightly larger than Earth, according to NASA.

It is also much closer to its star than Earth is to the sun, making GJ 1252b intensely hot and inhospitable, researchers said.

"The pressure from the star’s radiation is immense, enough to blow a planet’s atmosphere away," Michelle Hill, UC Riverside astrophysicist and study co-author, said in the post.

On Earth, some of its atmosphere is lost over time due to the sun, but volcanic emissions and other carbon cycling processes make the loss "barely noticeable." But when closer to a star, like GJ 1252b, a planet can’t keep replenishing the amount being lost, the researchers said.

"In our solar system, this is the fate of Mercury. It does have an atmosphere, but one that is extremely thin, made up of atoms blasted off its surface by the sun. The extreme heat of the planet causes these atoms to escape into space," researchers said in the UC Riverside post about the study.

To determine if GJ 1252b also lacks an atmosphere, the team — led by astronomer Ian Crossfield at the University of Kansas — measured infrared radiation from the planet during a secondary eclipse. This type of eclipse happens when a planet passes behind a star, and the light from the planet is blocked.

Researchers said that based on the infrared radiation measurement, it’s estimated that the planet’s daytime temperatures can reach 2,242 degrees Fahrenheit — a temperature that could melt copper, cast iron, gold, and silver.

The heat, in addition to the assumed low surface pressure, led the study team to believe there is no atmosphere on GJ 1252b. The team concluded that even with a large amount of carbon dioxide, which traps heat, the exoplanet would still not be able to hold onto an atmosphere.

"The planet could have 700 times more carbon than Earth has, and it still wouldn’t have an atmosphere," Stephen Kane, UCR astrophysicist and study co-author, said in the post."It would build up initially, but then taper off and erode away."

M dwarf stars often have more flares and activity than our sun, which would further reduce the likelihood that planets closely surrounding them could hold on to their atmospheres, the team said.

"It’s possible this planet’s condition could be a bad sign for planets even further away from this type of star," Hill said.

NASA’s powerful James Webb Space Telescope, which has already captured groundbreaking new images of our universe, will be looking at planets like this to analyze further, Hill added.

The study was funded in part by a grant from the Future Investigators in NASA Earth and Space Science and Technology program. In addition to Crossfield, the team included scientists from UC Riverside, NASA’s Jet Propulsion Laboratory, Caltech, the University of Maryland, Carnegie Institution for Science, Max Planck Institute for Astronomy, McGill University, University of New Mexico, and the University of Montreal.

So, which planets could be habitable?

Many of the 5,000 stars in Earth’s solar neighborhood are M dwarfs. If planets orbiting them can be ruled out entirely for life, the researchers said there are still about 1,000 stars similar to the sun with conditions that could make them suitable for life.

Hill also offered some optimism, saying if a planet is far enough away from an M dwarf, "it could potentially retain an atmosphere."

"We cannot conclude yet that all rocky planets around these stars get reduced to Mercury’s fate," Hill said. "I remain optimistic."