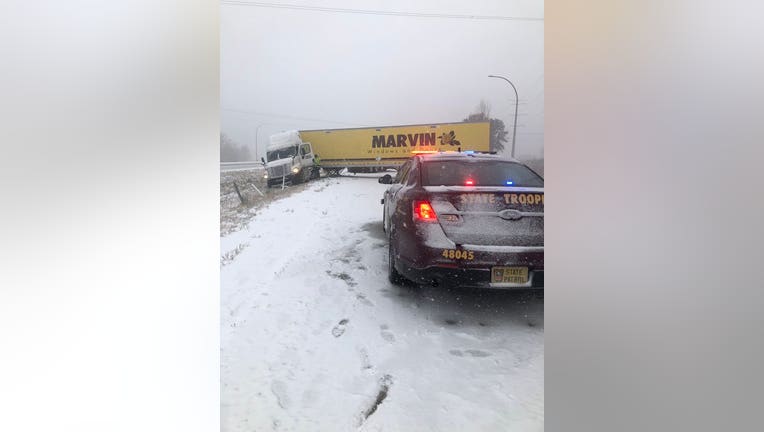 (FOX 9) - Roads were snow covered and slippery in much of Minnesota Tuesday afternoon as a fall snowstorm hit the state.

The Minnesota State Patrol reported troopers were responding to a number of crashes, spin outs and vehicles off the road in central Minnesota along Interstate 94. State Patrol says drivers in the area may encounter some standstill traffic due to the amount of crashes.

Crashes reported across state during hefty October snowstorm in Minnesota

Crashes and spinouts were reported across Minnesota Tuesday during an early October snowstorm.

The State Patrol responded to 493 crashes statewide from 11 a.m. to 8:30 p.m. 48 of those crashes involved injuries, including one serious injury. No fatalities were reported. 614 more vehicles spun out or off roads and 22 semis jacknifed in the storm during that timeframe, too.

Drivers are reminded to check the MnDOT website 511mn.org before heading out.

The early season snowstorm is causing closures across the area. In Minneapolis, the city's absentee ballot drop off locations are closing early at 3 p.m. so election workers and voters can get home safe.

The Minnesota State Patrol has issued the following reminders for driving in wintry conditions:

Get the FOX 9 Weather App to track winter weather live on your phone, with future radar, live streaming video of FOX 9 coverage and alerts and forecasts customized for your current location and favorite locations: fox9.com/apps