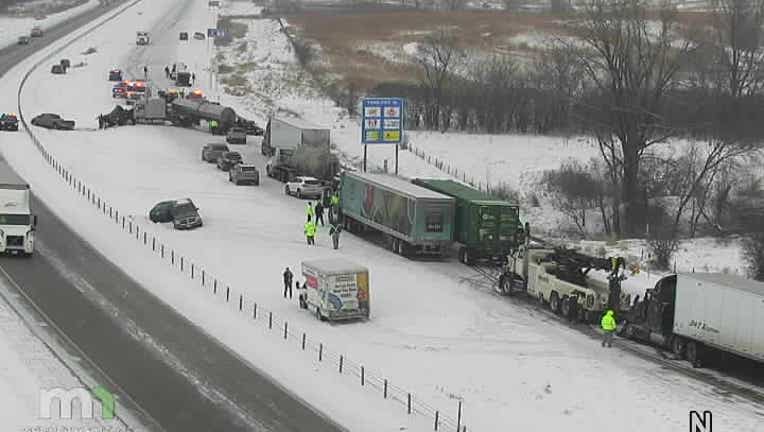 Several cars in the ditch, multiple semi jackknifes and other crashes led to the closure of I-35 northbound near Owatonna Thursday morning. ( MnDOT )

OWATONNA, Minn. (FOX 9) - 20 cars and six jackknifed semis piled up on I-35 northbound near Owatonna Thursday morning, according to the State Patrol.

Only minor injuries were reported, but the crash closed the northbound lanes of I-35 from just after 9:15 a.m. to noon.

20 cars, 6 semis pile up in Owatonna during snowy Thursday commute

The crash closed I-35 for multiple hours Thursday morning as crews worked to remove the 20 cars and 6 semis from the roadway.

The crash occurred one mile north of Hwy. 14 which is just south of Owatonna.

Photos and video of the scene showed several cars and trucks in the ditches next to the interstate as well as a few semis jackknifed.

UPDATE: I-35 has been reopened.