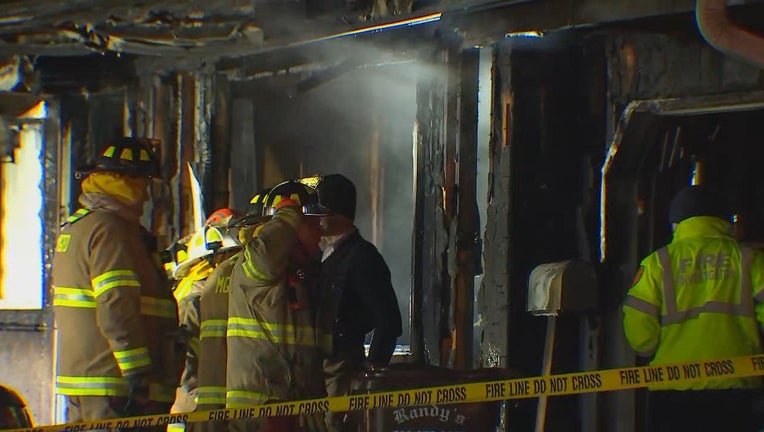 Fire investigators move through the remains of the burned-out home in Maple Grove. (FOX 9)

(FOX 9) - Of the seven deadly fires that have occurred in Minnesota so far this year, the State Fire Marshal says smoking appears to have caused over half of them.

Eight people died in the seven fires; four of the deaths happened due to fires likely caused by smoking.

On Jan. 9, Margaret Loretta West, 80, died in from injuries sustained in a fire at her home in Maple Grove. Fire officials said she used a wheelchair due to mobility issues. State fire investigators determined the smoking was the preliminary cause of the fire.

Two other fires believed to be smoking-related occurred on Jan. 14. One of the fires occurred at an apartment complex in Montevideo. Once firefighters were able to get the fire under control, they located a woman dead inside the apartment where the fire started. The other fire occurred in Eveleth. A 77-year-old woman died in that fire.

A fourth smoking-related fire claimed the life of a 29-year-old man in St. Paul on Jan. 18.

Smoking is the leading cause of fatal fires in Minnesota, according to the State Fire Marshal’s office. In 2019, seven people died in smoking-related fires, although that number could rise as investigators continue determining fire causes.

An investigation by the State Fire Marshal determined an unsafe use of heat caused a fire in Elk River on Jan. 12 that killed a 54-year-old man. On the same day, outdoor burning caused a fire in Zimmerman that left a 63-year-old woman dead.

The State Fire Marshal also determined a propane explosion killed a 93-year-old man and a 66-year-old woman in Bigfork on Jan 23.