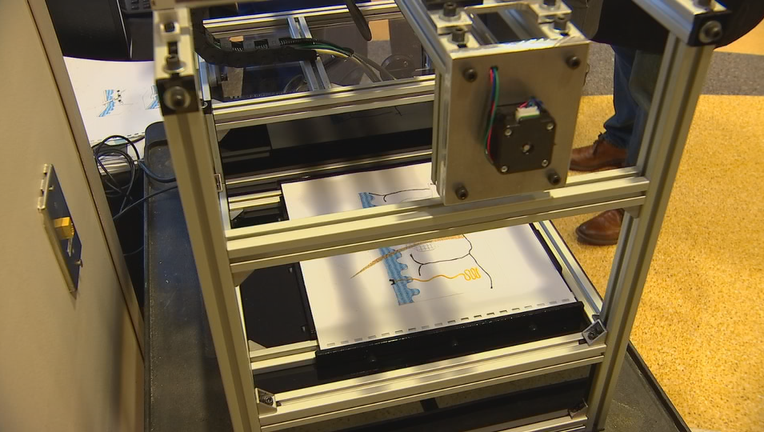 Students at the University of St. Thomas developed a scanner that can make 3-D , digital images of tactile diagrams created for the blind. (FOX 9)

ST. PAUL, Minn. (FOX 9) - Engineering students from the University of St. Thomas unveiled a scanner they developed to better preserve tactile images created for the blind.

When the Minnesota State Services for the Blind transcribes school textbooks into braille, images in textbooks are turned into tactile diagrams, so that a vision impaired reader can feel the image.

"One of the big issues they had was they have 40,000 of these handmade documents and what they needed was a way to back those up, to preserve those," said Henry Martinson, a St. Thomas student working on the project.

Three years ago, the Minnesota State Services for the Blind partnered with students from St. Thomas to develop a method. Wednesday, at the university's Engineering Senior Design Clinic, students showcased their scanner designed to digitally save tactile images as a 3-D file. The new way takes less than two minutes to scan a document compared to the hours it would take in the past to create a new copy.

"Before this, they would use something called thermoforming - they would melt plastic over it - but that would create just one copy," said Martinson. "They had no way of preserving them."

"We're in the 21st century, in the technology age and if we can save all of our files, all of our tactile diagrams as a 3-D electronic version, we've come a long way," said Allison O'Day, a braille specialist.

The project has been in the works for three years, with a new group of students picking up where the last group left off, adding their own improvements.

"It's much quieter than it was before, it can save and scan and save the image much quicker than they were able to do in the first year of the project," said O'Day. "But to give credit to the first year people, they had to start from scratch and come up with the idea. Each year they take it a little further."

In a week, the students plan to bring the scanner to State Services for the Blind to start scanning its files. Martinson says the next step would be developing a way to then create a physical copy from those 3-D scans. He says though at the moment, 3-D printers can't print at a high enough resolution.