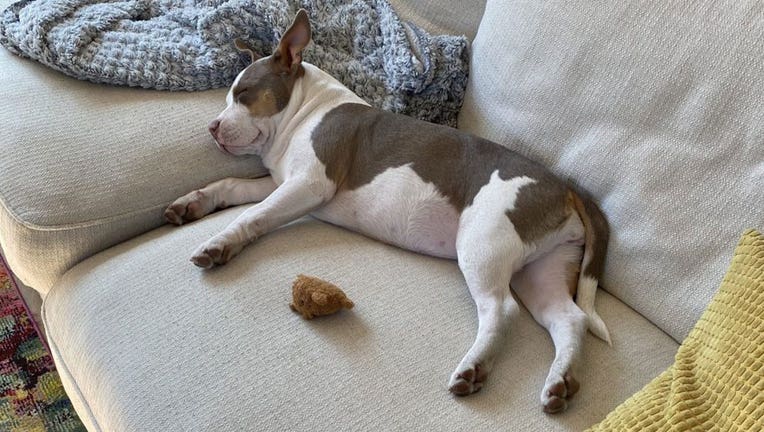 Sky was inside a Toyota Camry stolen from Ford Parkway in St. Paul on Friday. (Supplied)

ST. PAUL, Minn. (FOX 9) - Just three months after welcoming a new dog into her home, a Minneapolis woman is now searching for the animal after having her car stolen last week with the dog inside.

Grace Howard left her car parked outside of the Chipotle restaurant on St. Paul’s Ford Parkway on Nov. 12. But when she came back outside, it was gone.

Just three months after welcoming a new dog into her home, a Minneapolis woman is now searching for the animal after having her car stolen last week with the dog inside.

"The car is nothing to me, that’s replaceable. Sky is not replaceable," Howard said.

Sky is Grace’s 5-month-old puppy, and she’s the reason Grace left the car running, to keep her dog warm as she went inside for four or five minutes. But in that time someone took the opportunity to steal Grace’s black Toyota Camry (license plate: EJP-985)… along with the dog on its passenger seat.

"My only thought was Sky, I was like oh my god my dog is gone," Howard said.

On Monday, Grace stayed busy trying to get the word out about the American Bully. "Every minute she’s gone I’m worried about her safety, and if she’s warm if she’s fed… we haven’t been eating, we haven’t been sleeping, all hours of the day I’m checking comments if there are sightings, I’m popping in my car and going to the neighborhoods."

She’s also posting flyers around the Twin Cities, and keeping a close eye on different websites to see if anyone is trying to sell her pooch.

"We really miss her a lot… she was a part of our family," Howard said. "I will not stop until she’s found and safe with me."