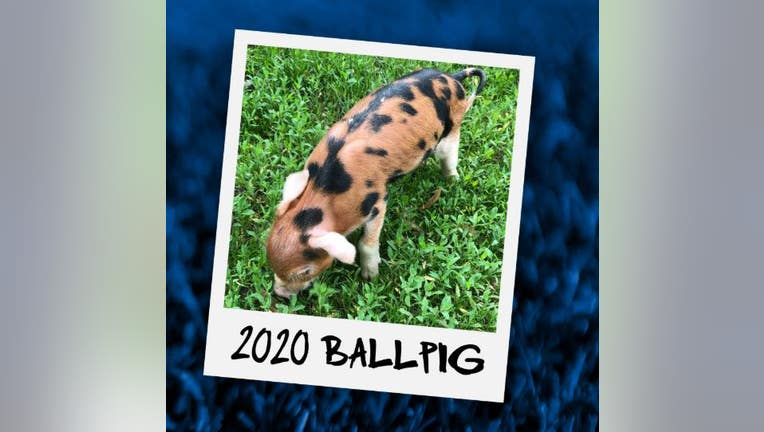 "This Little Piggy Stayed Home" is the name of the 2020 St. Paul Saints pig mascot.

ST. PAUL, Minn. (FOX 9) - The St. Paul Saints have chosen their pig for the 2020 season. While the little pork chop will have to wait a bit longer to make its official debut, the Saints organization would like to announce "This Little Piggy Stayed Home" as this year's ball pig.

The Saints hope to formally introduce "This Little Piggy Stayed Home" later this season at CHS Field if capacity restrictions for outdoor events have loosened. The pig's name was chosen from more than 1,000 entries submitted in the Name the Pig Contest. Tina Cook from St. Paul had the winning entry.

"In these Unporkcedented times this Little Piggy Stayed Home has used lots of Ham Sanitizer," read the announcement from the St. Paul Saints. "Sow More Than Ever he must do his part so as not to Fatten the Curve during this Global Hamdemic."

For the past 27 seasons, the Saints had have a pig mascot. Its name often a play on words of current events or celebrities. Previous winning names include Daenerys Hoggaryen, Little Red Porkette, Stephen Colboar, Brat Favre and Boarack Ohama.

The start of a pig mascot came after the organization saw another team in the league had success with a live golden retriever mascot. The wife of the St. Paul Saints owner later learned that St. Paul was known as "Pig's Eye" after Pierre "Pig's Eye" Parrant and the idea of a pig mascot took hold.

The American Association of Independent Baseball begins its 60-game season during the Fourth of July weekend, using a hub city format. The St. Paul Saints will play at the Sioux Falls Stadium as their home ballpark until restrictions change.