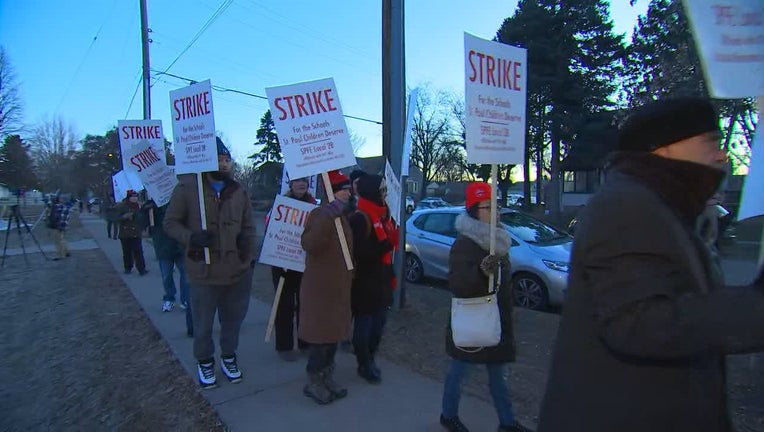 ST. PAUL, Minn. (FOX 9) - All St. Paul Public Schools are closed Tuesday, March 10 as teachers go on strike. A mediation session with the St. Paul Federation of Educators lasted until approximately 3 a.m. Tuesday but failed to produce a new two-year contract. School will also be closed on Wednesday, officials announced.

While the school district and teachers' union reached a compromise on some issues, the union’s demand for an increase in mental health, multilingual and special education funding were not met. That means more than 3,000 St. Paul Public School teachers are hitting the picket lines Tuesday for the first time in more than 70 years, forcing schools to close for roughly 37,000 students.

“We wanted to settle this contract and be in school with our students Tuesday morning,” said a statement from SPFE President Nick Faber. “Unfortunately, after more than nine months and marathon bargaining over the weekend, district leaders weren’t willing to move on the issues educators and parents know will help students thrive and break down racial barriers in our schools.”

“I can assure students, families, staff members and our community that the Board of Education, my team and I did absolutely everything we could to avoid a strike by teachers,” said a statement from St. Paul Superintendent Dr. Joe Gothard.

Schools open for breakfast and lunch

SPPS will offer meal sites during the strike, serving breakfast and lunch to anyone 18 and younger at no cost to families.

Riverview West Side School of Excellence

SPPS will be staffing Kid Space locations with supervised activities and meals for kindergarten through 5th grade students at no cost to families. Kid Space will begin on Thursday, March 12. More information and registration is available at www.spps.org/kidspace.

Kid Space will be staffed by SPPS employees who will continue working during the strike. The program will be able to serve approximately 4,000 kids. There will be no nurse or health care staff at the sites.

Details about Kid Space sites and bus stops is available at spps.org/kidspace beginning at 7:30 a.m. and registration will begin at 8:30 a.m. Additional questions can be answered by the SPPS Student Placement Office at 651-632-3700.

SPFE said the union's negotiators presented a plan that would stretch increased staffing over a three-year period to ease budgeting. The union's key demands include:

More multilingual staff for students and families who need interpreters.

An expansion of restorative practices to build community and a positive climate in schools.

The St. Paul Board of Education placed financial limits on its contract talks with all SPPS unions prior to the start of negotiations with SPFE. Those parameters called for wage increases of 1.5 percent in the first year and 2 percent in the second year of any new two-year contract, totaling $9.6 million.

SPPS said the union put 31 proposals on the table totalling more than $50 million, including more than $12 million in wage increases and $27 million to fund 300 new union positions to staff their student well-being and social-emotional support demands. SPPS said the district offered to fund a significant number of those positions, but SPFE said it wasn't enough.

Additional resources for students during strike

Recreation centers that normally open at 2 p.m. during the school year will open at 1 p.m. All other centers will operate normal business hours. For a full list of recreation center hours and locations visit stpaul.gov/reccenterhours.

St. Paul Public Libraries will operate their normal business hours. For a list of locations and hours visit sppl.bibliocommons.com/locations/.

Drop-in library programs will be available, including Homework Centers, Reading Together, Createch, and storytimes. For more information, visit sppl.org/spps-strike-information/.

The Saint Paul Parks and Recreation Rec Check program will open one hour early, from 1 p.m. to 6 p.m.

For questions on programming available from the Parks And Recreation Department, call 651-266-6400 or your local rec center.