NEW YORK - The son of a 9/11 victim went after Rep. Ilhan Omar and "the squad" during the annual reading of the names at the 9/11 ceremonies at Ground Zero in Lower Manhattan.

Nicholas Haros, Jr. was wearing a black shirt with "Some people did something" as he read out the names of victims.

He ended with his mother, Frances Haros, before going into a monologue about Omar's comment on the Sept. 11, 2001 attacks.

He started with, "'Some people did something' said a freshman Congresswoman from Minnesota." 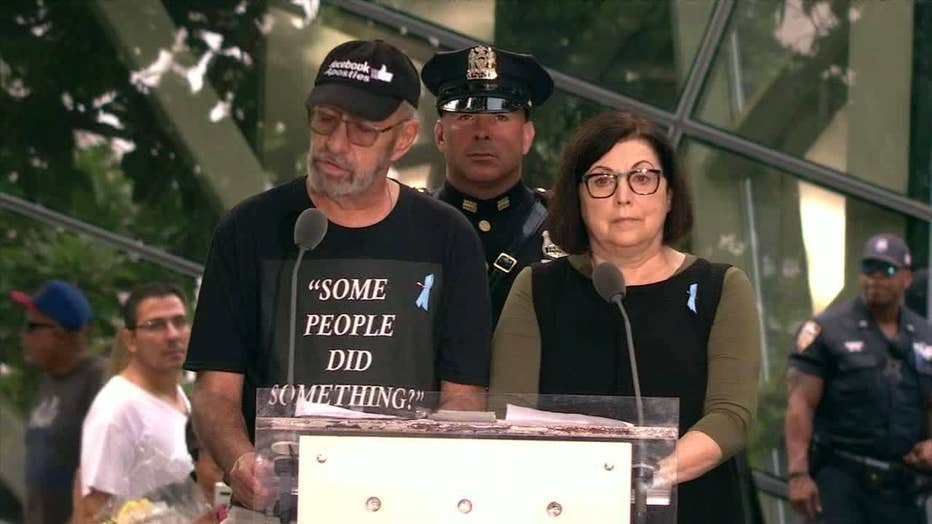 The comments were a reference to Rep. Omar's statement while speaking about the Council of American-Islamic Relations being set up because "some people did something" and because of it people were losing access to civil liberties.

Haros went on to say, "Today, I am here to respond to you, exactly who did what to whom.  Madam, objectively speaking, we know who and what was done.  There is no uncertainty about that.  Why your confusion?  On that day 19 Islamic terrorists, members of al Qaeda, killed over 3,000 people and caused a billion of dollars of economic damage.  Is that clear?""

Haros continued, "But as to whom?  I was attacked, your relatives and friends were attacked, our constitutional freedoms were attacked and our nation's founding on Judeo-Christian principles were attacked.  That's what some people did.  Got that now?  We are here today, congresswoman, to tell you and the squad just who did what to whom."

He ended by saying, "Show respect and honoring them, please.  American patriotism in your position demands it."

Members of the crowd applauded when Haros finished.