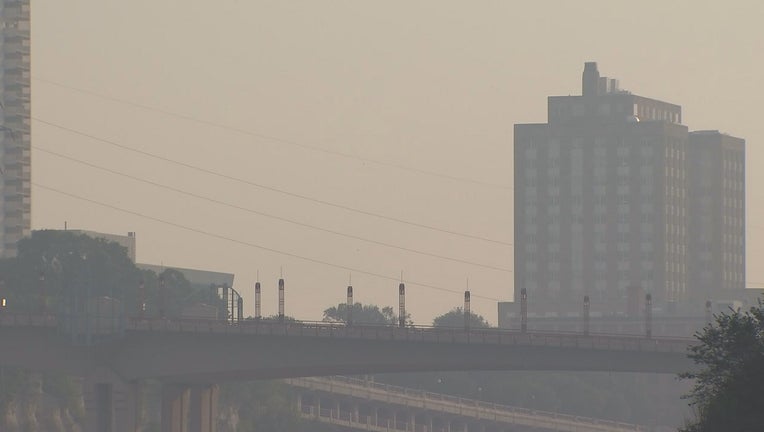 The smoky air in Minnesota isn't going anywhere until at least next week, according to the state's forecast. (FOX 9)

On Friday, the Minnesota Pollution Control Agency extended its air quality alert, saying that smoky conditions from Canadian wildfires will linger and worsen over the weekend.

The new air quality alert will be in effect until Tuesday at 3 p.m.

Smoky air expected to linger in Minnesota until Tuesday, worsen over weekend

The unpleasant, record-poor air quality that Minnesota has faced in recent days as smoke from Canadian wildfires drift down to Minnesota isn't going anywhere this weekend.

The pollution control agency says the worst will move in on Saturday morning where parts of the state including the Twin Cities will face purple-level air quality which the state categorizes as "very unhealthy" and red-level quality or "unhealthy."

So far, Minnesota has faced red and orange-level air conditions, which are between 101 and 200 on the air quality index, that impact people sensitive to air quality.

Governor Walz was among a group of governors discussing the wildfires in Canada that are causing smoke to drift into Minnesota -- along with other environmental issues.

Under the purple alert, between 201 and 300 on the index, the state says "sensitive individuals should avoid any outdoor activity" and everyone else should avoid prolonged exertion.

The purple alert will cover most of central Minnesota, starting at the Canada border south into the metro.

To track air conditions, you can visit the state air quality website.